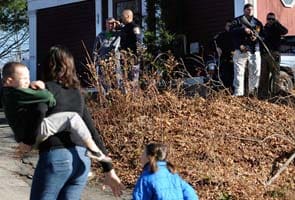 The official also said Ryan Lanza's girlfriend and another friend are missing in New Jersey.

Promoted
Listen to the latest songs, only on JioSaavn.com
Speaking on condition of anonymity, the official said the suspect is dead from a self-inflicted gunshot wound.

The official spoke on the condition of anonymity because the source was not authorized to speak on the record about the developing criminal investigation.