"Maybe I should not say this, but the president of the United States conducted himself the way he did -- I think it was a national embarrassment," Joe Biden said during a stop in Alliance, Ohio 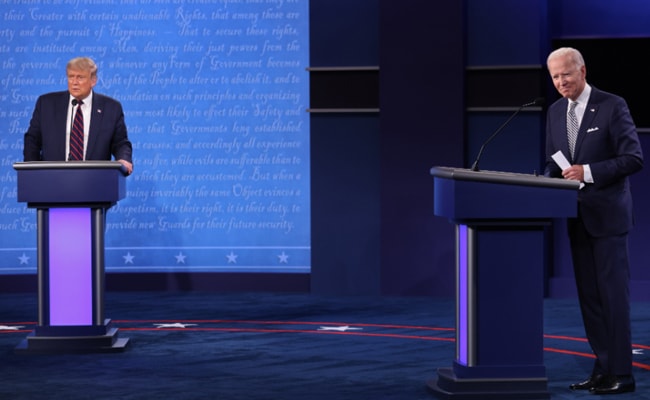 "Maybe I should not say this, but the president of the United States conducted himself the way he did -- I think it was a national embarrassment," Biden said during a stop in Alliance, Ohio as part of a train tour through swing state Ohio and neighboring battleground Pennsylvania.

Trump and Biden engaged in a fierce verbal brawl Tuesday in Cleveland where they faced off in their first presidential debate.

Both men launched biting personal attacks, but political pugilist Trump was widely seen as interrupting his rival more often -- to the point that Biden told him to "shut up."

During the showdown, Trump declined to make a clear and forceful denunciation of white supremacist groups or the far-right, male-only Proud Boys, instead giving a shout-out to the militia group by saying they should "stand back and stand by," and that the real problem is "far-left" extremists.

"My message to the Proud Boys and every other white supremacist group is: cease and desist," Biden said.

The former vice president, appearing invigorated after what could be described as an assertive debate performance where he stood his ground, criticized Trump for failing to speak directly to the American people about their plight during the Covid-19 crisis.

"Does your president have any idea or understand what you're going through? And if he does, does he care about you?" Biden asked.

"Or does he just ignore you, look down on you, lie to you?"

Trump's debate performance was "all about him," Biden added.

"He didn't speak to you or your concerns for the American people even once."