Donald Trump Says US Will Withdraw From Paris Climate Accord

With Donald Trump's action, the United States will walk away from nearly every nation in the world on one of the pressing global issues of the 21st century. 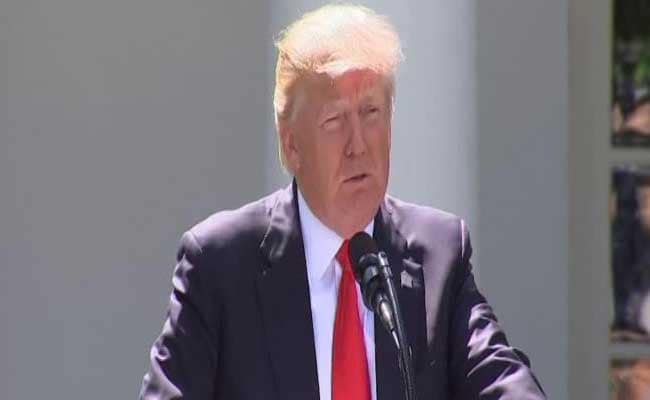 American withdrawal, promised by Donald Trump during his campaign, would deepen a rift with US allies.

Washington: US President Donald Trump said he will withdraw the United States from the landmark 2015 global agreement to fight climate change, spurning pleas from US allies and corporate leaders in an action that fulfilled a major campaign pledge.

"We're getting out," Mr Trump said at a ceremony in the White House Rose Garden in which he decried the Paris accord's "draconian" financial and economic burdens.

"In order to fulfill my solemn duty to protect America and its citizens, the United States will withdraw from the Paris climate accord," Mr Trump said. But he added that the United States would begin negotiations to re-enter either the Paris accord or "a new transaction on terms that are fair to the United States, its businesses, its workers, its people, its taxpayers."

With Mr Trump's action, the United States will walk away from nearly every nation in the world on one of the pressing global issues of the 21st century. The pullout will align the United States with Syria and Nicaragua as the world's only non-participants in the accord.

The United States was one of 195 nations that agreed to the accord in Paris in December 2015, a deal that former U.S. President Barack Obama was instrumental in brokering.

Supporters of the accord condemned Mr Trump's move as an abdication of American leadership and an international disgrace.

"At this moment, when climate change is already causing devastating harm around the world, we do not have the moral right to turn our backs on efforts to preserve this planet for future generations," said US Senator Bernie Sanders, who sought the Democratic presidential nomination last year.

"Ignoring reality and leaving the Paris agreement could go down as one of the worst foreign policy blunders in our nation's history, isolating the U.S. further after Trump's shockingly bad European trip," Democratic Senator Sheldon Whitehouse added.

Under the pact, which was years in the making, nations both rich and poor committed to reducing emissions of so-called greenhouse gases generated by burning fossils fuels and blamed by scientists for warming the planet.

The United States had committed to reduce its emissions by 26 percent to 28 percent from 2005 levels by 2025. The United States, exceeded only by China in greenhouse gas emissions, accounts for more than 15 percent of the worldwide total.

US supporters of the pact said any pullout by Mr Trump would show that the United States can no longer be trusted to follow through on international commitments.

International leaders had pressed Mr Trump not to abandon the accord. At their meeting last month, the pope gave Mr Trump a signed copy of his 2015 encyclical letter that called for protecting the environment from the effects of climate change and backed scientific evidence that it is caused by human activity.

Despite pressure from allies in the Group of Seven rich nations at a meeting in Italy last week, Mr Trump had refused to endorse the agreement, rebuffing leaders from Canada, France, Germany, Italy, Japan and Britain.

Virtually every nation voluntarily committed to steps aimed at curbing global emissions of "greenhouse" gases such as carbon dioxide generated from burning of fossil fuels.

Last year was the warmest since records began in the 19th century, as global average temperatures continued a rise dating back decades that scientists attribute to greenhouse gases.

They warned that U.S. withdrawal from the deal could speed up the effects of global climate change, worsening heat waves, floods, droughts and storms.

During the campaign, Mr Trump said the accord would cost the U.S. economy trillions of dollars with no tangible benefit. Mr Trump has expressed doubts about climate change, at times calling it a hoax to weaken US industry.

The Republican vowed during the campaign to "cancel" the Paris deal within 100 days of becoming president on Jan. 20, part of an effort to bolster U.S. oil and coal industries.

China, which overtook the United States as the world's biggest emitter of greenhouse gases in 2007, and the European Union will seek on Friday to buttress the Paris agreement, with Li meeting top EU officials in Brussels.

In a statement backed by all 28 EU states, the EU and China were poised to commit to full implementation of the agreement, officials said.

Some U.S. states, including California, Washington and New York, have vowed to continue to reduce greenhouse gas emissions and continue engaging in the international climate agreement process.

Oil majors Shell and ExxonMobil Corp. supported the Paris pact. Several big coal companies, including Cloud Peak Energy, had publicly urged Mr Trump to stay in the deal as a way to help protect the industry's mining interests overseas, though others asked Mr Trump to exit the accord to help ease regulatory pressures on domestic miners.

Promoted
Listen to the latest songs, only on JioSaavn.com
(Reporting by Valerie Volcovici, Timothy Gardner, Jeff Mason, and Roberta Rampton; Additional reporting by Robin Emmott and Robert-Jan Bartunek in Brussels, Michelle Nichols at the UN; Writing by Will Dunham; Editing by Nick Zieminski and Cynthia Osterman)
© Thomson Reuters 2017