He may find that being president -- a difficult task at the best of times -- may be impossible alone. 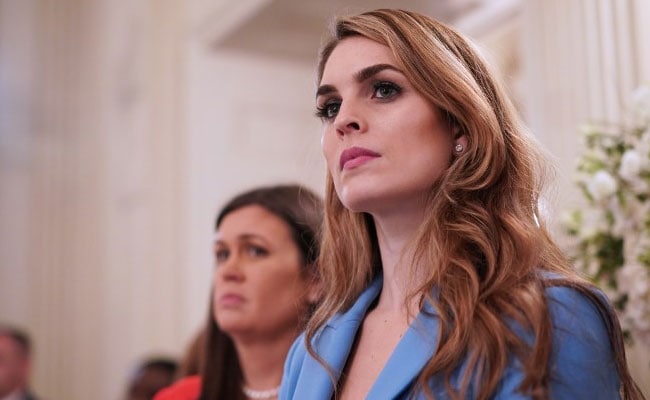 Washington: The shock departure of Donald Trump's top aide Hope Hicks from the White House has rattled an already demoralized staff and left the US president dangerously isolated.

There is, as Barack Obama once said, "a certain loneliness to the job" of being America's president.

Abraham Lincoln, no doubt, felt it when his son Willie died -- his wife beset with grief, his cabinet quarreling and the nation engaged in an great civil war.

Richard Nixon certainly felt it amid the invasion of Cambodia, when he sat alone in the White House at 4:00 am with Rachmaninoff blaring, and then made a mumbling pre-dawn visit to the Lincoln Memorial.

And Trump must feel it now, as his administration bleeds trusted staff and lurches from crisis to crisis.

There have been many high-profile departures from Trump's revolving-door White House, from pivotal figures like chief of staff Reince Priebus to Omarosa Manigault-Newman, whose job was never clear and impact was scarcely felt.

But Hope Hicks' exit is different.

Hicks spent three years with Trump -- a long time in Trumpworld -- but even before that, she earned the family's trust by working for the president's daughter Ivanka.

She was a rare outsider invited inside the clan.

In the White House, there was no problem big or small that the 29-year-old former model, whom Trump affectionately called "Hopey," could not handle.

Others who played a similar role, like physically imposing bodyguard Keith Schiller -- whom Trump trusted enough to hand-deliver the letter firing then FBI director James Comey -- have also departed.

Both Hicks and Schiller understood the 71-year-old president's habits. They knew when he needed a Diet Coke, when to press him and when to let him vent.

Even his close family, like scandal-enmeshed son-in-law Jared Kushner and his daughter Ivanka, seem like they are not long for 1600 Pennsylvania Avenue.

Kushner has been stripped of his top secret clearance and his future as Middle East peace envoy is in serious doubt.

The only "original" left in the inner circle is Trump's tweeting partner and one-time caddy Dan Scavino. He is the White House's director of social media -- and constantly at the president's side.

Beyond the narrowing inner circle, Trump has approached his broader political court like Lord Palmerston on steroids -- living by the British statesman's dictum that "there are no permanent friends or permanent enemies, only permanent interests."

He has repeatedly lashed out at Attorney General Jeff Sessions who, as a senator, opened the door for official in Washington to back his controversial presidential bid.

He denounced his former chief strategist and eminence grise as "Sloppy Steve Bannon," ridiculing him publicly because he "cried when he got fired and begged for his job."

Would-be allies are realizing when backed into a corner, Trump has almost always chosen fight over flight, whether that is the prudent strategy or not.

Not even Trump's interests are permanent.

Republicans around the White House Cabinet Room on Wednesday, at a meeting on gun control, exchanged knowing looks as the president displayed only the very slightest grasp of the subject.

That smugness turned to bewilderment as he shattered long-standing party opposition to gun control and threatened to strip people of weapons without due process.

On Thursday, he repeated the performance, undoing decades of Republican orthodoxy on trade and announcing sanctions that could prompt a trade war with China and Europe.

The decision was reportedly made without the knowledge of supposedly key aides like chief economic advisor Gary Cohn and chief of staff John Kelly.

Kelly, a retired four-star Marine general, on Thursday joked darkly about how he got the job: "I did something wrong and God punished me, I guess."

This type of drama has left the president with few friends and many enemies as he confronts scandals and crises too numerous to list.

All the while, the drumbeat of Robert Mueller's investigation into Russia meddling in the 2016 presidential election reverberates along the corridors of the White House.

"I predict more departures," he said.

As a former reality TV star, Trump may feel the burden and the inherent loneliness of the Oval Office less acutely than his predecessors.

He is, after all, the only modern president who never walked down the street to grab a cup of coffee, or went for drinks with friends before he entered the White House.

But loneliness is one thing -- political isolation is a different matter altogether.

Trump may yet find that being president -- a difficult task at the best of times -- may be impossible alone.


(Except for the headline, this story has not been edited by NDTV staff and is published from a syndicated feed.)
Comments
Hope Hicks ResignationDonald Trump