The heads of states played with Hideki Matsuyama, one of the world's top golfers at the Kasumigaseki Country Club in Japan. 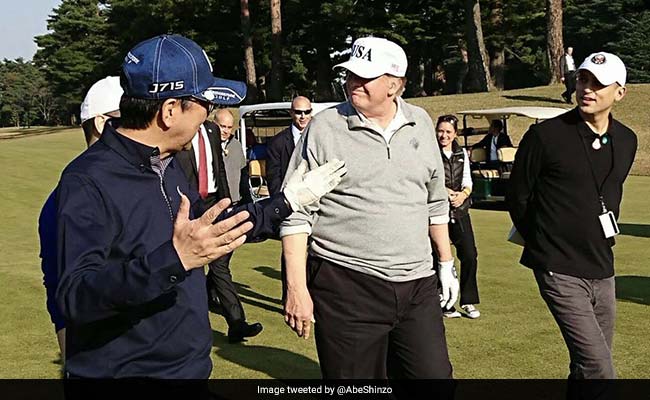 Kawagoe, Japan: Golfing buddies Donald Trump and Shinzo Abe teed off for a quick nine holes on Sunday, relaxing ahead of a high-stakes summit on the North Korea crisis.

After a business lunch of hamburgers with US beef -- a possible cue to discuss trade issues -- the pair donned golfing kit for a round at the Kasumigaseki Country Club, which will host the event at the Tokyo 2020 Olympics.

They played with Hideki Matsuyama, one of the world's top golfers, and Trump had warm words for his skills.

"He is the greatest player in the history of Japan. Possibly their greatest celebrity... He's a truly great player, a great athlete," Trump told reporters on Air Force One.

Trump described Matsuyama as a "long ball hitter" but could not resist adding: "I hit the ball pretty long."

However, he graciously conceded that Matsuyama was likely to tee off further than him, warning the press of possible fake news.

"If I come back and say I was longer than him, don't believe it."

Inside, the two leaders signed white caps that read, "Donald and Shinzo Make Alliance Even Greater."

Abe and Trump played golf when the Japanese prime minister visited the United States in February, with the Japanese leader keen to stress that his skills were not on a par with Trump's.

At the time Trump tweeted a photograph in which he was wearing a white baseball cap and polo shirt, high-fiveing Abe who was dressed in white pants and a navy blue cap.

The two have enjoyed a near-bromance forged by a shared love of golf. Trump has praised Abe's "strong hands" and a "very, very good chemistry" between them.

When they met at the Country Club, they greeted each other warmly, grasping each other's elbows under a clear blue Tokyo sky.

"It's going to be a lot of fun," Trump said on the plane.

Abe also appeared to have enjoyed his round, tweeting: "A round of golf with a marvellous friend (President Donald J. Trump), full of spirited conversation."

Promoted
Listen to the latest songs, only on JioSaavn.com
He posted a picture of the pair apparently in earnest conversation strolling down the fairway, Abe in an indigo golfing jacket and blue cap, Trump in a grey jumper and white cap.