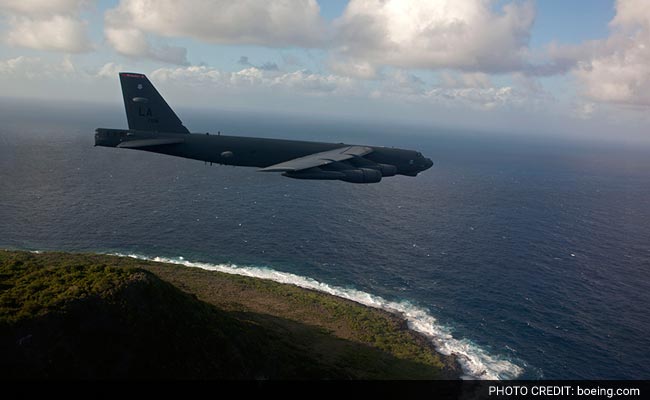 Long Range Strike Bomber program envisions the creation of between 80 and 100 strategic bombers to replace America's fleet of B-52s and B-1s.

Washington: The US Air Force is getting ready to announce the winner of a multibillion-dollar contract to build a new generation of long-distance bombers that will replace aging, Cold War machines.

Dubbed the Long Range Strike Bomber (LRSB) program, the Air Force will in the coming weeks award the mega-contract to either Northrop Grumman or a team made up of Boeing and Lockheed Martin.

The program envisions the creation of between 80 and 100 strategic bombers to replace America's fleet of B-52s and B-1s. Almost everything about it is classified, save for the cost of each plane, which was set at $550 million per unit in 2010 dollars.

Experts and industry watchers say the bomber will be a very different animal from those it replaces.

Far from merely transporting bombs -- nuclear or otherwise -- the new planes will be high-altitude intelligence-gathering machines packed with sensors and surveillance equipment to scoop information.

Aviation analyst Richard Aboulafia said the LRSB is likely to be of a "flying-wing" design giving it stealth capabilities that make it hard to spot on radar.

It will also be able to mask its electronic signals, as well as being packed with powerful jammers to stop enemies from targeting the plane.

It won't fly at supersonic speeds, Aboulafia said, because doing so would burn up too much fuel and reduce its range, while also making it easier to spot.

"Don't make a lot of noise, don't create a radar signature, go as high as you can and of course have those on-board electronic warfare systems that can jam the other guy if he does target you," Aboulafia told AFP.

The United States already has a fleet of B-2 Stealth Bombers, which are virtually invisible to radar and have the distinctive, flying-wing design that makes them look a bit like a sci-fi boomerang.

But overseas deployments of the B-2 are rare because the United States jealously guards the costly aircraft's secrets. There are only 20 B-2s in existence.

Additionally, the Pentagon wants the new planes to eventually be capable of being flown without a crew and to be refuelable while airborne.

But a remote-controlled bomber is not necessarily a good idea, Aboulafia said, because it could be vulnerable to hacking and would need to be exploded via a "kill switch" if anything seemed to be going wrong.

"Pilots are the cheapest insurance policy ever," he said, noting that a crew could get a plane out of trouble if anything went awry.

Being able to fly extremely high is important too because it would put the LRSB out of range of many surface-to-air missiles and fighters.

Countries such as Russia and China have invested heavily in missile systems and ultra-modern radar to try to counter the threat of any approaching enemy.

Experts say the new bomber is likely already well advanced in its development, but it will still take years before it is deployed.

The first flight tests of the LRSB likely won't take place until the mid-2020s and the new planes probably wouldn't go into action until almost 2030.

That means the Pentagon doesn't have any immediate plans to mothball the hulking B-52 bombers that were developed in the 1950s.

Boeing and Lockheed together accounted for nearly 15 precent of the Pentagon's acquisition budget in 2014, compared to 3.25 percent for Northrop, according to aerospace and defense market intelligence specialist BGA-AEROWEB.

The stakes for the companies could hardly be higher. The Center for Budgetary and Strategic Assessments estimates the program will cost about $73 billion.

To raise its profile at this crucial juncture, Northrop produced a tantalizing advertisement broadcast during this year's massively viewed Super Bowl.

"Building aircraft the likes of which the world has never seen before... this is what we do," a voice intones as the camera peeks at a cloth-covered plane, presumably their envisioned new LRSB.