US offers evacuation flights as Mubarak clings to power 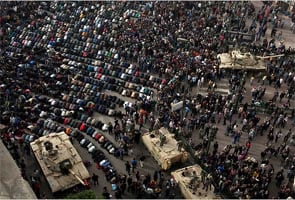 Cairo: As President Hosni Mubarak struggled to maintain a tenuous hold on power and the Egyptian military reinforced strategic points in the capital, the United States said on Sunday it was offering evacuation flights for its citizens and urged all Americans currently in Egypt to "consider leaving as soon as they can safely do so."

The announcement injected a stronger note of growing alarm among Egypt's allies as an uprising against Mr. Mubarak's almost three decades in power entered a sixth day, fraught with uncertainty about its outcome. Police have largely withdrawn from the country's major cities and the military has done little so far to hold back tens of thousands of demonstrators defying a curfew to call for an end to Mr. Mubarak's rule.

On Sunday, Turkey, a major regional player, also said it was sending three flights to evacuate 750 of its citizens from Cairo and Alexandria. France, Britain and Germany issued a joint statement urging President Mubarak and the protesters to show restraint. But, like President Obama, they did not call for the ouster of an autocratic leader who has cast himself as a lynchpin of Western diplomatic and security interests in the Middle East.

In a statement, the American Embassy here said it was telling "U.S. citizens in Egypt who wish to depart that the Department of State is making arrangements to provide transportation to safehaven locations in Europe."

"Flights to evacuation points will begin departing Egypt on Monday, Jan. 31," the statement said, adding that the Obama administration had authorized the "voluntary repatriation" of American citizens including diplomats' dependents and some employees not dealing with emergencies, meaning they could choose to leave if they wished.

With the situation on the ground still fluid, soldiers appeared to have thrown up new roadblocks, turning back cars as Egyptians on foot filtered back into the city center following the end of the overnight curfew. Before dawn, around 50 tanks and other armored vehicles rolled into the upmarket suburb of Heliopolis, near the airport and close to President Mubarak's home, and there seemed to be a renewed effort to tighten controls on the flow of news.

In another part of Cairo, witnesses reported seeing around 100 tanks and armored personnel carriers gathered for deployment in the same parade ground where the former President Anwar al-Sadat, who made the Camp David peace agreement with Israel in 1979, was assassinated in 1981. At that time, Mr. Mubarak was Vice President and the killing of Mr. Sadat propelled him into a position he has never left since, steadfastly refusing to name a successor.

In the central Tahrir, or Independence, Square -- which has become an epicenter of protest -- the demonstrators seemed greater than the thousands on Saturday, feting the military as guardians. At one point, crowds hoisted aloft an officer and processed through the throng chanting: "The people and the army are one hand."

Sunday is usually the start of the working week here but banks schools and the stock market remained closed in a city paralyzed by the uprising, scarred by looting and braced for further protests. Some Cairenes said gas stations were running out of fuel and many automated cash machines had either run out of money or had been looted.

State television said Al Jazeera, the Qatar-based satellite broadcaster whose coverage of the turmoil in the Arab world has spread word of protests from capital to capital, was being taken off the air in Egypt. But, initially at least, the station continued to broadcast. Earlier, its Arabic channel had proclaimed: "Egypt speaks for itself." Internet connections remained cut on Sunday as the authorities sought to contain the potential spread of unrest.

Egypt closed its border with the Palestinian coastal enclave of Gaza, Paletinian authorities said. In a highly unusual development, a diplomat said, Israel authorized Egyptian troops to take up positions in the north of the Sinai peninsula, despite a prohibition on such deployments in the 1979 Camp David peace accord. The diplomat spoke in return for anonymity in light of the sensitivity of the issue.

As street protests flared for a fifth day on Saturday, Mr. Mubarak fired his cabinet and appointed Omar Suleiman, his right-hand man and the country's intelligence chief, as vice president, stirring speculation that he might be planning to resign. That, in turn, raised the prospect of an unpredictable handover of power in a country that is a pivotal American ally -- a fear that administration officials say factored into President Obama's calculus not to push for Mr. Mubarak's resignation, at least for now.

The appointments of two former generals -- Mr. Suleiman and Ahmed Shafik, who was named prime minister -- also signaled the central role the armed forces will play in shaping the outcome of the unrest. But even though the military is widely popular with the public, there was no sign that the government shakeup would placate protesters, who added anti-Suleiman slogans to their demands.

On Saturday, Mohamed ElBaradei, the Noble laureate and a leading critic of the government, told Al Jazeera that Mr. Mubarak should step down immediately so that a new "national unity government" could take over, though he offered no details about its makeup.

But, among more affluent Egyptians, some said the country needed stability more than upheaval. After night when men took to the streets armed with broom sticks and kitchen knives to defend their home against looters in Heliopolis, one resident, Sarah Elyashy, 33, said: "It has been the longest night of my life."

"I wish we could be like the United States with our own democracy, but we can't," she said. "We have to have a ruler with an iron hand."

Control of the streets, meanwhile, cycled through a dizzying succession of stages.

After an all-out war against hundreds of thousands of protesters who flooded the streets on Friday night, the legions of black-clad security police officers -- a reviled paramilitary force focused on upholding the state -- withdrew from the biggest cities.

Looters smashed store windows and ravaged shopping malls as police stations and the national party headquarters burned through the night. Two mummies were destroyed in Cairo's Egyptian Museum, the country's chief antiquities official said. Then thousands of army troops stepped in late Friday to reinforce the police. It was unclear whether the soldiers in the streets were operating without orders or in defiance of them. But their displays of support for the protesters were conspicuous throughout the capital. In one striking example, four armored military vehicles moved at the front of a crowd of thousands of protesters in a pitched battle against the Egyptian security police defending the Interior Ministry.

But the soldiers refused protesters' pleas to open fire on the security police. And the police battered the protesters with tear gas, shotguns and rubber bullets. Everywhere in Cairo, soldiers and protesters hugged or snapped pictures together on top of military tanks. With the soldiers' consent, protesters scrawled graffiti denouncing Mr. Mubarak on many of the tanks. "This is the revolution of all the people," read a common slogan. "No, no, Mubarak" was another.

By Saturday night, informal brigades of mostly young men armed with bats, kitchen knives and other makeshift weapons had taken control, setting up checkpoints around the city.

Some speculated that the sudden withdrawal of the police from the cities -- even some museums and embassies in Cairo were left unguarded -- was intended to create chaos that could justify a crackdown.

Before the street fights late Saturday, government officials had acknowledged more than 70 deaths in the unrest, with 40 around Cairo. But the final death toll is likely to be much higher. One doctor in a crowd of protesters said the staff at his Cairo hospital alone had seen 23 people dead from bullet wounds, and he showed digital photographs of the victims.

There were ominous signs of lawlessness Saturday in places where the police had abandoned their posts.

Peter Bouckaert, emergencies director of Human Rights Watch, said that he observed a group of soldiers completely surrounded by people asking for help in protecting their neighborhoods. The army told them that they would have to take care of their own neighborhoods and that there might be reinforcements Sunday.

"Egypt has been a police state for 30 years. For the police to suddenly disappear from the streets is a shocking experience," Mr. Bouckaert said.

State television also announced the arrest of an unspecified number of members of the Muslim Brotherhood, the outlawed Islamist group long considered the largest and best organized political group in Egypt, for "acts of theft and terrorism."

It was unclear, however, what role the Brotherhood played in the protests or might play if Mr. Mubarak were toppled.

If Mr. Mubarak's decision to pick a vice president aroused hopes of his exit, his choice of Mr. Suleiman did nothing to appease the crowds in the streets. Long trusted with most sensitive matters like the Israeli-Palestinian talks, Mr. Suleiman is well connected in both Washington and Tel Aviv. But he is also Mr. Mubarak's closest aide, considered almost an alter ego, and the protesters' negative reaction was immediate.

Many of the protesters were critical of the United States and complained about American government support for Mr. Mubarak or expressed disappointment with President Obama. "I want to send a message to President Obama," said Mohamed el-Mesry, a middle-aged professional. "I call on President Obama, at least in his statements, to be in solidarity with the Egyptian people and freedom, truly like he says."
Comments
Egypt unrestUS on Egypt