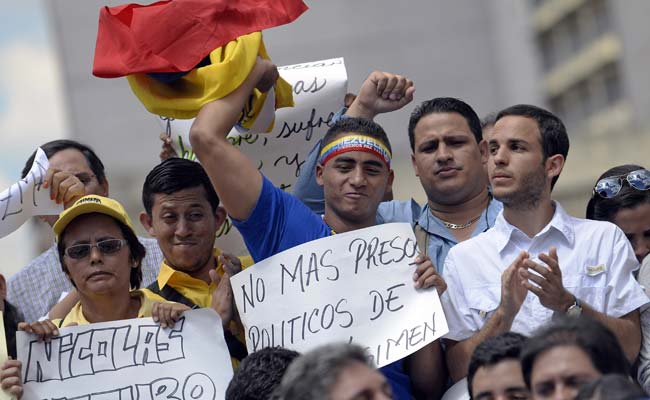 The United States and Latin American nations voiced concerns on Friday over political tensions in Venezuela after the socialist government arrested the opposition mayor of Caracas in an alleged coup plot.

Almost exactly one year after opposition figure Leopoldo Lopez was arrested as he led a wave of protests against Maduro, intelligence agents burst into Mayor Antonio Ledezma's office late Thursday and hauled him to jail.

A third radical critic of the government, ousted lawmaker Maria Machado, is under investigation over an alleged plan to assassinate Maduro, though she remains free.

The attorney general's office said Friday that Ledezma, 59, will be booked for his alleged involvement in a conspiracy "to organize and carry out violent acts against the government."

Opposition leader Henrique Capriles called on the government to produce evidence of the supposed conspiracy.

"Does Maduro think that putting everyone in prison is going to get him 50 popularity points or that he's going to win elections?" the two-time presidential candidate asked.

Maduro, who has accused the opposition of trying to topple him several times since his April 2013 election, said late Thursday that the mayor was detained over a coup plot financed by the United States.
Washington dismissed the "baseless and false" claims.

Regional worries
The United States condemned Ledezma's arrest, saying the "systematic intimidation" of opposition figures appears to be a bid by the government to divert attention from the country's political and economic challenges.

The top US diplomat for Latin America, Roberta Jacobson, called on Venezuela to free opposition leaders "as they have been unjustly imprisoned, and to improve respect for human rights."

Chile's socialist administration of President Michelle Bachelet voiced concern over the "polarisation in Venezuela, which could be a significant obstacle to dialogue between the government and the opposition."

Colombian center-right President Juan Manuel Santos said "the latest events worry us" and that he hoped Ledezma would have "all the guarantees of due process."

The UNASUR South American bloc, meanwhile, is planning to hold an extraordinary meeting of foreign ministers on the situation in Venezuela.

Jose Miguel Insulza, secretary general of the Organization of American States, said Ledezma's arrest "has caused alarm" due to the way he was detained.

He called on the government to "stop those acts that lead to a spiral of polarization that envelops Venezuelan society."

But while Insulza said Maduro's government must clarify the allegations against the mayor and respect due process, he added that "no one could oppose the holding of trials that the authorities deem necessary."

Ledezma was first elected in 2009, but many of his powers have been stripped by the central government over the years.

Last week, Ledezma and other opposition figures signed a newspaper advertisement calling for a democratic transition in Venezuela.

Maduro's popularity has plummeted to 20 per cent amid a growing shortage of basic goods, massive lines outside supermarkets and soaring inflation of almost 70 per cent in the recession-hit country.

"Arresting opposition leaders can momentarily divert attention from the economic problems, but it will only get worse," said Luis Vicente Leon, a leading Venezuelan political analyst.

Cuba's foreign ministry said it rebuffs "the economic and media war against the Bolivarian revolution and energetically rejects the statements and meddling actions of the United States and Organization of American States."

Promoted
Listen to the latest songs, only on JioSaavn.com
Ledezma's arrest led to spontaneous, if small, protests, with people banging pots after his arrest Thursday night. On Friday, fewer than 200 people attended a rally called by Machado.

Protests in recent weeks have been much smaller than last year. In late January, the defense minister authorized the use of "deadly force" to keep public order.