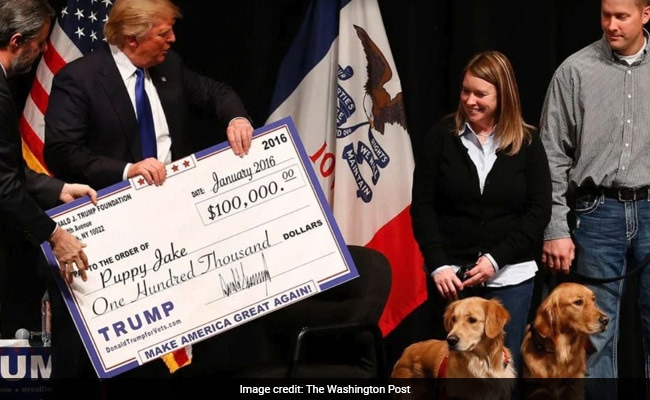 Trump had taken $250,000 from the charity to settle lawsuits involving his for-profit businesses.

A New York judge on Thursday ordered President Donald Trump to pay $2 million in damages for misusing funds from a tax-exempt charity - taking the charity's money to pay debts for his for-profit businesses, to boost his 2016 campaign and to buy paintings of himself, according to court documents.

It marked an extraordinary moment: The president of the United States acknowledged in a court filing that he had failed to follow basic laws about how charities should be governed. Previously, Trump had insisted the charity was run properly and the suit was a partisan sham.

The June 2018 lawsuit from New York Attorney General Letitia James, a Democrat, was based largely on information first uncovered by The Washington Post. It alleged "persistently illegal conduct" at the Donald J. Trump Foundation, where Trump served as president since 1987.

As part of the settlement, Trump also agreed to disburse the $1.8 million remaining in the foundation to a set of charities, and to shutter it for good. In a statement signed by Trump's attorney, the president admitted to poor oversight of the charity.

James had asked Scarpulla to make Trump pay $2.8 million plus more in punitive damages, but Scarpulla said she was reducing that payment to $2 million.

The reason: The president had agreed to submit to extra monitoring of any future charitable activities in New York, so that "the conduct which engendered this petition should not occur in the future," the judge said.

If Trump does ever join a charity board - or starts a new charity of his own - the charity must fill a majority of board seats with people who have no relationship to Trump. It also must hire a qualified attorney, submit to audits and agree never to pay Trump or his company for any services.

Philip Hackney, a former IRS lawyer who now teaches charity law at the University of Pittsburgh, said that was a striking limitation for a state to place on a sitting president of the United States.

"That's pretty significant statement about a lack of trust of the president's capabilities," Hackney said, given that Trump is - in most other respects - one of the most powerful people on earth. "It's truly astounding."

In his own statement, Trump's attorney, Alan Futerfas, attacked James' lawsuit as "politically motivated," even as Trump admitted to many of James' allegations.

"Now that this matter is concluded, the Trump Foundation is proud to make this additional contribution," Futerfas said, meaning the $2 million in damages. In all, $3.8 million will go to eight charities: Army Emergency Relief, the Children's Aid Society, Citymeals-on-Wheels, Give an Hour, Martha's Table, United Negro College Fund, United Way of National Capital Area, and the U.S. Holocaust Memorial Museum.

Trump and his business have already repaid the foundation about $338,000 since The Post began its reporting on the Trump Foundation, to reimburse the charity for various improper expenditures.

Trump's three eldest children - Ivanka, Donald Jr. and Eric - were also named in the original lawsuit, because they were listed as board members at the Trump Foundation. In reality, the board did not meet at all for 19 straight years, from 1999 to 2018.

The three Trump children were required to take an "in-person interactive" training class in how to be better board members, and the suit against them was dismissed, court documents say.

"The president and his family engaged in persistent violations of the law," James said in an interview with The Post on Thursday. She said this was one of the larger charity cases her office had worked on in recent years.

"Hopefully this will serve as a lesson to anyone that no one is above the law. . .not even the President of the United States," James said.

In the 2018 lawsuit, the attorney general's office had originally sought to ban Trump from serving on any charity board in New York. Trump avoided that ban by agreeing to the close monitoring if he ever returned to charity leadership in New York.

The Trump Foundation had been a relatively small charity that in recent years had received very little in donations from Trump himself. Trump donated nothing from 2009 to 2015. Instead, the foundation subsisted largely on a gift from pro-wrestling moguls Vince and Linda McMahon: $5 million in total. McMahon was later appointed by Trump as head of the Small Business Administration.

The foundation's troubles were first uncovered in 2016 - starting when a Post reporter attended a Trump campaign rally in Waterloo, Iowa. Onstage, Trump gave away a $100,000 check from the Trump Foundation to a local charity.

In addition, the Post found that Trump had used the charity's money to make a $25,000 donation to a political committee associated with then-Florida Attorney General Pamela Bondi, a Republican. Charities are prohibited from making political gifts.

The Post also found that Trump had taken more than $250,000 from the charity to settle lawsuits involving his for-profit businesses. And Trump had used the charity to buy things for himself, including a helmet signed by former pro football player Tim Tebow, and a large painting of himself that was later hung on the wall of Trump's Doral golf resort in Miami.

At the time, a Trump campaign spokesman named Boris Epshteyn said that arrangement with the painting was actually proper. Doral, he said, was actually doing the Trump Foundation a favor by storing the charity's art collection on its wall.

"Right, of course, he's doing a good thing for his foundation," Epshteyn said then.

The court did not agree.

All of these incidents - the donation at the Iowa fundraiser, the donation to Bondi, the helmet and the painting - were cited in the settlement as examples of improper spending.

After its investigation, the attorney general's office alleged that Trump had effectively treated the foundation as a personal checkbook - without taking care to follow the laws governing charity spending. In fact, the foundation had only spent $163 on legal fees from 2001 to 2016.

In an interview with Allen Weisselberg - a Trump Organization executive who was listed as the foundation's treasurer - Weisselberg said he had no idea he was even on the board, according to the state's lawsuit.

When state investigators asked about the foundation's policies for handing out grants, Weisselberg said, "There's no policy, just so you understand."

Lloyd Hitoshi Mayer, a professor of charity law at Notre Dame, said in an interview Thursday that Trump had broken one of the most basic rules of charities. Money put into a charity must be used for charitable purposes, even if the charity has your name on it.

"It doesn't matter if you're in charge of the charity. It's the charity's money, not yours," Mayer said.