Alluding to North Korea's initial reaction, Antony Blinken said: "We'll look to see not only what North Korea says but what it actually does in the coming days and months." 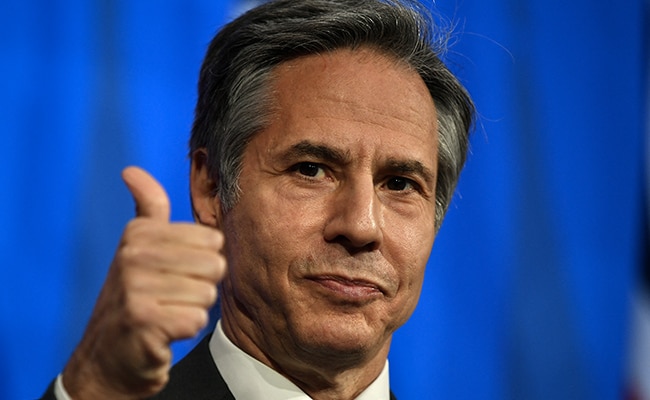 "Up to North Korea to decide whether it wants to engage or not on that basis," Antony Blinken

Secretary of State Antony Blinken on Monday asked North Korea to embrace diplomacy as he briefed allies on a new US strategy that stresses low-key progress rather than Donald Trump's pageantry.

In London for the first in-person Group of Seven meetings in two years, Blinken consulted his counterparts from Japan and South Korea on President Joe Biden's new policy approach which has already been denounced by Pyongyang.

"I hope that North Korea will take the opportunity to engage diplomatically and to see if there are ways to move forward toward the objective of complete denuclearisation of the Korean peninsula," Blinken told reporters.

"It is, I think, up to North Korea to decide whether it wants to engage or not on that basis," he said after meeting his UK counterpart Dominic Raab.

Alluding to North Korea's initial reaction, Blinken said: "We'll look to see not only what North Korea says but what it actually does in the coming days and months."

Trump boasted that he saved Asia from war and deserved the Nobel Peace Prize. But he was not able to secure a permanent agreement to end North Korea's nuclear programme or even, as the former president considered, to officially end the Korean War after seven decades.

Blinken acknowledged that successive administrations, including from his Democratic Party, had failed to achieve their goals with North Korea.

"What we have now is a policy that calls for a calibrated, practical approach that is open to and will explore diplomacy with North Korea to try to make practical progress," Blinken said.

He met separately in London with the foreign ministers of Japan and South Korea before a three-way meeting with the Asian allies -- often at loggerheads with each other -- planned Wednesday.

South Korea's dovish government supported Trump's reconciliation with the North while Japan privately held concerns, fearing a deal under Trump would have sacrificed its security.

North Korea said Sunday that the new US approach was a "spurious signboard for covering up its hostile acts".

US officials largely expected a dismissive first reaction from North Korea, which is known for strident statements, including in 2019 describing Biden as a "rabid dog" who "must be beaten to death with a stick".

The G7 foreign ministers are meeting for the first time since the start of the pandemic as concerns ease in many Western nations despite rising casualties in India and Brazil.

The British hosts imposed strict Covid protocols with delegations' movements restricted and Blinken and Raab greeting each other not with a handshake but an elbow bump.

The three-day talks in London will set the stage for a leaders' summit next month in southwest England on what will be Biden's first foreign trip.

South Korea -- as well as India, Australia, South Africa and ASEAN bloc chair Brunei -- were invited by Britain as guests for meetings of the club of seven wealthy democracies.

Raab said Britain wanted to work with "agile clusters of like-minded countries that share the same values", amid a push by Biden to form a broader coalition of democracies faced with a rising China and smaller autocratic states.

Blinken also raised the growing turbulence in Myanmar both with Japan and Brunei.

Japan has comparatively open channels to the military, which seized power on February 1, while ASEAN leaders late last month invited the junta chief to a summit and urged an end to the violence.

Blinken praised the initiative from the 10-nation Southeast Asian bloc including its call for a special envoy, who the top US diplomat said should be able to deal with all sides in Myanmar.

"But it is vital, regardless of anything else, that the violence cease, that the prisoners be released and that Myanmar return to the path of democracy," Blinken said.