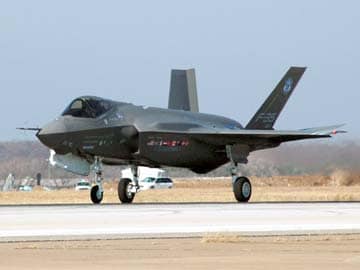 Washington: The United States military is grounding its entire fleet of F-35 fighter jets as it completes additional engine inspections following a fire aboard an aircraft in Florida last week.

The US Air Force and Navy issued directives Thursday to halt all F-35 flights after the June 23 fire at Eglin Air Force Base. The cause of the incident remains unclear and is under investigation.

Although preparations are still underway for the F-35 to participate in air shows in Britain the Royal International Air Tattoo starting July 11 and the Farnborough International Airshow beginning July 19  the Pentagon said a final decision on the aircraft's participation would be made next week.

Last week's fire was only the latest in a series of technical problems and delays for the much-vaunted Joint Strike Fighter, the costliest weapons program in Pentagon history.

Engine maker Pratt & Whitney, a division of United Technologies Corp., said it was working closely with the Air Force Safety Investigation Board to determine the cause of the problem and inspect all of the fleet's engines.

Engine inspections are estimated to take about 90 minutes per aircraft.

In a short statement, Pentagon spokesman Rear Admiral John Kirby said "additional inspections of F-35 engines have been ordered, and return to flight will be determined based on inspection results and analysis of engineering data."

The Defense Department's leadership supports this approach, he added.

The F-35 has been touted as the ultimate stealth-attack plane able to evade radar detection.

Promoted
Listen to the latest songs, only on JioSaavn.com
But it has suffered one setback after another, putting the project seven years behind schedule and vastly over budget.

The program's price tag is estimated at nearly $400 billion on 2,443 aircraft, with each plane costing a staggering $160 million. But additional delays could raise costs even further.