US Elections 2020 Highlights: Children Brought Into US By Cartels, Says Trump In Big Debate With Biden

US Presidential Debate: Thursday's clash featured plenty of personal attacks between Donald Trump and Joe Biden who evince little respect for each other. 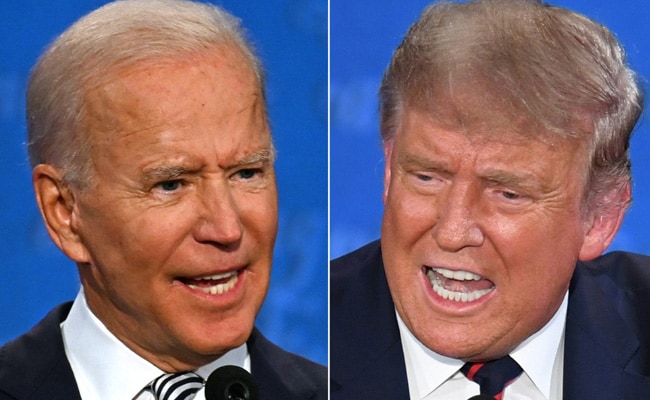 Democrat Joe Biden renewed his attacks on US President Donald Trump's handling of the coronavirus pandemic at Thursday's final debate before the November 3 election, while Trump leveled unfounded corruption accusations at Biden and his family.

Trump, a Republican, initially adopted a more restrained tone than he did during their first presidential debate in September, which was quickly derailed by his constant interruptions.

But Thursday's clash still featured plenty of personal attacks between two men who evince little respect for each other.

The televised encounter in Nashville, Tennessee, represented one of Trump's last remaining opportunities to reshape a campaign dominated by a pandemic that has killed more than 2,21,000 people in the United States.

The pair's last televised showdown spiraled into an ugly confrontation marred by interruptions and name calling, prompting organizers to introduce mic-muting this time to try to keep things civil.

A day before the debate, US authorities had warned that Russia and Iran took steps to influence public opinion ahead of the November 3 vote.

To cut down on the interruptions that marked the last debate, during the two minutes the candidates have to respond to the moderator's questions only their mic will be live.

Donald Trump backed out of a second scheduled debate set for last Thursday over a disagreement about the virtual format following his COVID-19 infection. At that time, he raised concerns about having his microphone muted.

Here are the Highlights on US Presidential Debate: