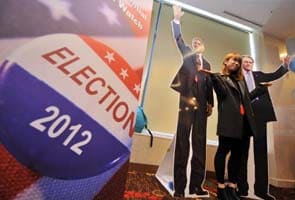 Washington: President Barack Obama rolled up victories in Wisconsin and Pennsylvania on Tuesday and limited Republican challenger Mitt Romney's path to victory as US voters decided between two starkly different visions for the country.

Obama's victories in the two states put pressure on Romney to score victories in Ohio, Florida and Virginia, three battleground states where the race was too close to call.

At least 120 million people were expected to decide between the Democratic incumbent and Romney after a long, expensive and bitter presidential campaign centered around how to repair the ailing U.S. economy.

In the state-by-state battle to get to 270 electoral votes needed for the presidency, Obama and Romney piled up early victories in the states they were expected to win easily.

Early vote-counting in the swing state of Florida showed them running neck-and-neck. Obama led in the critical battleground state of Ohio and Romney held an early lead in a third swing state, Virginia.

Romney needs all three of those states to navigate a narrow path to the presidency, while Obama could afford to lose one or two of them and still win a second four-year term.

The Republican's chances were hit by Obama victories in Wisconsin and Pennsylvania, as well as New Hampshire. Romney last week visited Wisconsin, home state of his vice presidential running mate, Paul Ryan, and had stopped in Pennsylvania earlier on Tuesday in hopes of pulling off a surprise win there.

In a victory that also limited Romney's path to a victory, Obama won Michigan, the Republican's state of birth but where he ran afoul of voters by opposing an auto industry bailout pushed by Obama. Some polls had shown a tight race there.

Obama was projected the winner in the Democratic strongholds of New York, New Jersey, Maryland, Vermont, Connecticut, Delaware, Massachusetts and his home state of Illinois, as well as Washington, D.C.

Who Americans choose will set the country's course for the next four years on spending, taxes, healthcare, the role of government and foreign policy challenges such as the rise of China and Iran's nuclear ambitions.

Each man offered different policies to cure what ails America's weak economy, with Obama pledging to raise taxes on the wealthy and Romney offering across-the-board tax cuts as a way to ignite strong economic growth.

National opinion polls before the election showed Obama and Romney in a virtual dead heat, although Obama had a slight advantage in several vital swing states - most notably Ohio - that could give him the 270 electoral votes needed to win the state-by-state contest.

Three-quarters of both Romney and Obama supporters decided to vote for their preferred candidate before the October debates between the candidates, according to the data.

The Romney side was encouraged by what was described as heavy turnout in Republican areas from Florida to Colorado.

Romney made last-minute visits to Ohio and Pennsylvania on Tuesday to try to drive up turnout in those states, while Vice President Joe Biden was dispatched to Ohio. Obama remained in his hometown of Chicago.

Expressing confidence, Romney told reporters on his plane as he flew back to Boston that he had written only one speech for evening, one celebrating his victory.

"I'm very proud of the campaign that I've run, to tell you the truth," he said. "I'm sure like any campaign, people can talk to mistakes, but that's going to be part of anything that's produced by human beings," he said.

Obama told a Denver television station he had speeches ready for either outcome. "You always have two speeches prepared because you can't take anything for granted," he told FOX31.

The multimillionaire former head of a private equity firm and a former governor of Massachusetts, Romney would be the first Mormon president and one of the wealthiest Americans to assume the nation's highest office.

Obama, the country's first black president, seeks to avoid being relegated to a single term, something that has happened to only one of the previous four occupants of the White House.

Whichever candidate wins, a razor-thin margin might not bode well for the clear mandate needed to help break the partisan gridlock in Washington.

Fueled by record spending on negative ads, the battle between the two men was focused primarily on the lagging economic recovery and persistently high unemployment, but at times it turned personal.

The close race raises the prospect of a disputed outcome similar to the 2000 election, which ended with a U.S. Supreme Court decision favoring George W. Bush over Al Gore after legal challenges to the tight vote in Florida. Both the Romney and Obama campaigns have assembled legal teams to deal with possible voting problems, challenges or recounts.

Although voting appeared to go smoothly in most places, complaints about procedures and possible irregularities surfaced sporadically across the electoral map. But there were no immediate claims of anything widespread or systematic enough to cast doubt on the credibility of the election outcome.

Storm-weary residents across New York and New Jersey encountered long lines as they went to cast their ballots just over a week after the devastating storm Sandy caused havoc in the region. New Jersey granted a last-minute extension to the deadline for email voting.
The balance of power in the U.S. Congress will also be at stake in races for the Senate and House of Representatives that could affect the outcome of "fiscal-cliff" negotiations on spending cuts and tax increases, which kick in at the end of the year unless a deal is reached.

Obama's Democrats are now expected to narrowly hold their Senate majority, while Romney's Republicans were projected to retain House control.

Former Maine Governor Angus King won a three-way contest for the Senate seat of retiring Republican Olympia Snowe. King ran as an independent, but he is expected to caucus with Democrats in what would amount to a Democratic pick-up.