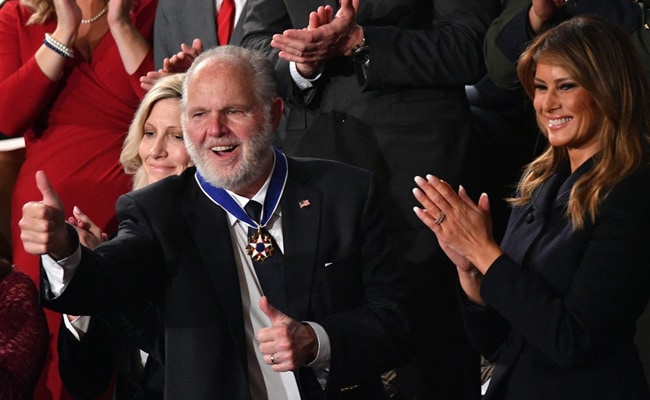 Rush Limbaugh was the US conservative radio host who spent more than four decades on the air.

Rush Limbaugh, the firebrand radio host and relentless provocateur with a finger on the pulse of America's conservative middle class, has died after battling lung cancer. He was 70.

The death of the hugely influential broadcaster, who announced he was sick in 2020, drew an outpouring of tributes from right wing figures led by former president Donald Trump.

"He was a conversationalist, a brilliant guy," said Trump, who phoned into Fox News. "Totally brilliant. He was unique... he was a great man."

Over a career spanning half a century, Limbaugh cultivated a reputation among his millions of devotees as the brash but canny voice of hardworking but put-upon men and women in the American heartland.

A fixture on car stereos and kitchen radios from Mississipi to Montana, he articulated his fans' fears, gave voice to their hopes and, often, played to their prejudices.

Aspiring Republican politicians would tune in to take the temperature of would-be voters on all manner of conservative betes noir, from "socialist" health care and environmental regulation to cancel culture.

He has been seen as a significant influencer of the conservative movement since the Ronald Reagan presidency, even as he was accused of promoting conspiracy theories and misinformation.

Limbaugh helped spread unfounded "birther" theories that president Barack Obama was born outside the United States, and contended that the 2019 mosque shootings in New Zealand, which killed 51 Muslims, were staged by a leftist to attack conservatives.

Known as a provocateur or "shock" host with a passionate right-wing following, Limbaugh's syndicated show has been aired since its 1988 launch.

However, Limbaugh also attracted fierce criticism over his career from Americans riled by his ultraconservative take on current affairs.

"He made our politics more toxic and contributed to the dangerous levels of polarization that dominate our public discourse today," watchdog group Media Matters for America said in statement.

One of his last controversies was the mockery of then democratic candidate for president Pete Buttigieg's homosexuality, saying last year that Democrats would never choose a gay man over Trump.

"They're saying, 'OK, how's this going to look?'" Limbaugh asked. "Thirty-seven-year-old gay guy kissing his husband on stage, next to Mr Man, Donald Trump.'" Buttigieg was 38 at the time.

The controversy came just days after then-president Trump outraged liberals but delighted conservatives during his State of the Union address by giving Limbaugh the much-coveted Presidential Medal of Freedom -- the highest possible civilian award.

Just over a year later, Limbaugh's family delivered the news of his death.

'A voice for millions'

"We, the Limbaugh family, are deeply saddened to announce that our beloved Rush has died," read a family statement, signed by wife Kathryn Adams Limbaugh.

Limbaugh "will forever be the greatest of all time, a courageous, brilliant gentle giant and radio pioneer," the statement added.

Born in 1951 in Missouri, Limbaugh's radio career began in 1971 but he at first suffered several failures at various stations.

In 1984, he was hired by a station in Sacramento, California which was looking for a flamboyant host.

In less than a year, Limbaugh became the most listened-to personality in the city.

In vast swaths of rural America, religious shows and conservative talk radio -- often broadcast on an AM frequency -- frequently dominate the airwaves.

Messages of tribute poured in from conservatives.

"While he was brash, at times controversial, and always opinionated, he spoke his mind as a voice for millions of Americans and approached each day with gusto," former president George W. Bush said in a statement.

Initial reactions from the administration of President Joe Biden, a Democrat, were restrained.

"His condolences go out to the family and the friends of Rush Limbaugh," said Press Secretary Jen Psaki. "I don't know that I anticipate a statement from the president."