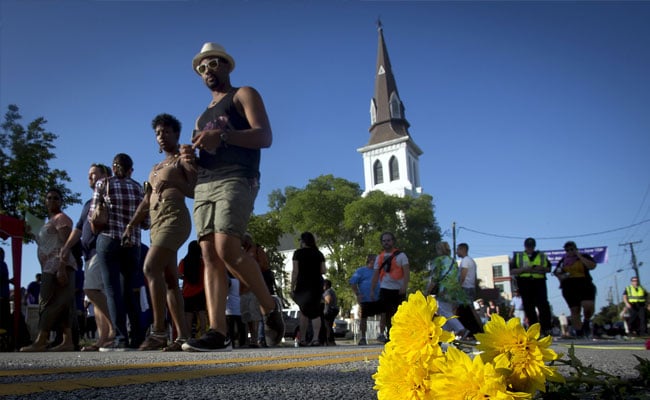 File Photo: People walk past a bunch of flowers left in memorial on the ground as they take part in a "Black Lives Matter" march past Emanuel African Methodist Episcopal Church in Charleston, on June 20, 2015. (Reuters)

Washington: An overnight fire that destroyed a small-town African-American church in South Carolina once torched by Ku Klux Klan members is reviving fears that arsonists are targeting places of worship with black congregations.

The Mount Zion African Methodist Episcopal (AME) Church in Greeleyville - 60 miles (100 kilometers) north of Charleston - is the sixth church in the southern United States to be hit by fire in less than a fortnight.

Many suspect at least some of the blazes were racially motivated, coming so soon after a lone white gunman shot and killed nine blacks during bible study at Charleston's historic Emanuel AME church on June 17.

"There are still a lot of questions to be answered," Williamsburg County chief deputy sheriff Stephen Gardner told reporters in Greeleyville when asked Wednesday about the cause of the Mount Zion fire.

"We haven't ruled anything in or anything out at this point," added Federal Bureau of Investigation (FBI) agent Craig Chilcott, as sniffer dogs helped police and fire investigators comb through the church ruins.

While arson was one possibility, others pointed to a proliferation of thunderstorms in the vicinity before a local resident called in the fire at 8:30 pm Tuesday (0030 GMT Wednesday).

Mount Zion last burned to the ground in June 1995, in a fire that prompted the arrest of two Ku Klux Klan members in their early 20s.

The pair got prison terms after pleading guilty to federal civil rights charges, while the church won a $37.8 million lawsuit against the Christian Knights of the Ku Klux Klan and its South Carolina leader.

"To see that church in flames again, it gives you an ill feeling," said Greeleyville mayor Jessie Parker, whose rural community of 375 is nearly 60 percent African-American.

Of the other black Southern churches struck by fire in recent days, three - in Georgia, Tennessee and North Carolina -have been described as acts of arson or suspected arson, according to US news media.

A fourth, in South Carolina, is not thought to have been a criminal act, while another in Florida has been blamed on a tree limb falling on power lines.

The hashtag #WhoIsBurningBlackChurches meanwhile trended on Twitter, with some dreading a revival of a wave of church arsons that gripped the United States in the 1990s.

Some 1,300 church fires are reported in the United States every year, with arson - the leading cause - accounting for 25 percent, the US Fire Administration said in a 2001 analysis, the most recent available.

In a 2013 report, the National Fire Protection Association said 16 percent of the nearly 1,800 fires that break out at US places of worship every year were set intentionally.

A Department of Justice report in 2000 meanwhile found that 58 percent of defendants convicted of church arson were "motivated by bias."

"Because of its prominence in the African-American community, the church has historically been a target of arson and destruction by bigots and white supremacists," said the department's National Church Arson Task Force, launched by then-president Bill Clinton in the aftermath of the 1995 Mount Zion fire.

Dylann Roof, 21, has been charged with murder for the Charleston killings, which officials allege was motivated by racial hatred. If convicted, he could face the death penalty.

The massacre reignited an emotional debate over the Civil War-era Confederate battle flag, which some covet as a banner of Southern pride but others condemn as an emblem of hate and white supremacy.

Pressure is mounting on South Carolina's legislature to take down the flag from its front lawn, where for 15 years it has flown alongside a Confederate war memorial.

Another Klan faction, the Loyal White Knights of the Ku Klux Klan, plans to demonstrate in support of the flag in the state capital Columbia on July 18 - a month and a day after the Charleston tragedy.