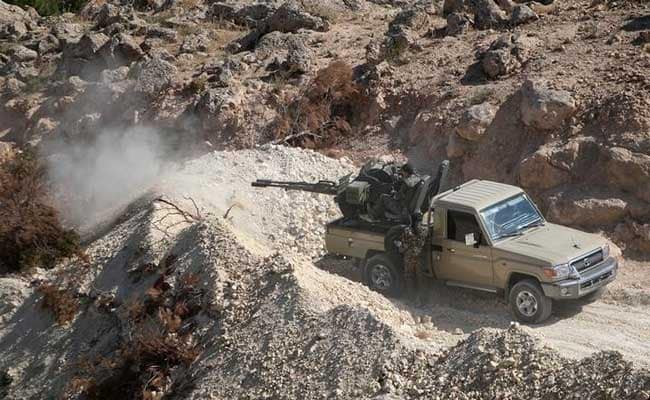 A fighter of the Syria Democratic Forces mans an anti-aircraft weapon in the southern rural area of Manbij, Syria on May 31, 2016. (Reuters)

Beirut/Baghdad: US-backed Syrian fighters have surrounded the ISIS-held city of Manbij from three sides as they press a major new offensive against the jihadists near the Turkish border, a spokesman for the fighters said on Monday.

But in a sign of the difficulty world powers have faced in building a coalition to take on the self-declared caliphate, the slow pace of a separate assault by the Iraqi army on a militant bastion near Baghdad caused a rift between the Shi'ite-led government and powerful Iranian-backed Shia militia.

The simultaneous assaults on Manbij in Syria and Falluja in Iraq, at opposite ends of ISIS territory, are two of the biggest operations yet against ISIS in what Washington says is the year it hopes to roll back the caliphate.

The Syria Democratic Forces (SDF), including a Kurdish militia and Arab allies that joined it last year, launched the Manbij attack last week to drive ISIS from its last stretch of the Syrian-Turkish frontier. If successful it could cut the militants' main access route to the outside world, paving the way for an assault on their Syrian capital Raqqa.

Last week Iraqi forces also rolled into the southern outskirts of Falluja, an insurgent stronghold 750 km down the Euphrates River from Manbij just an hour's drive from Baghdad.

The SDF in Syria are backed by US air strikes and a small contingent of American special forces. The Iraqi army is also backed by US air power, as well as by powerful Iran-backed Shia militia led by politicians who have emerged as rivals of Prime Minister Haider Abadi.

The assaults by ISIS's disparate enemies on a variety of fronts have put unprecedented pressure on the group, although its fighters have put up strong resistance so far.

The offensives have also put large numbers of civilians in fresh peril. The United Nations estimates 50,000 civilians are trapped in Iraq's besieged Falluja, and more than 200,000 are at risk of being displaced by fighting around Syria's Manbij.

The Syrian Observatory for Human Rights, a British-based group that reports on the war, said the US-backed forces in northern Syria had cut the road north from Manbij to ISIS-held Jarabulus at the Turkish border.

Sharfan Darwish, spokesman for the SDF-allied Manbij Military Council, said the US-backed alliance had advanced to within 6 km (4 miles) of Manbij, and the attack was going to plan. More than 150 jihadists had been killed, with 50 of the bodies in SDF hands, he said.

Homes being used by ISIS members were now empty as they had left with their families, he said: "They took everything they could and left the city."

Reuters was unable to verify the account, and ISIS fighters could not be reached.

The SDF included the commander of one of the groups, Faysal Abu Layla of the Sun of the North Battalions, who died of wounds caused by a mortar bomb, Darwish said.

The Observatory said 56 ISIS members and 19 SDF fighters had been killed so far. It also said ISIS fighters had sent their families out of Manbij, but did not confirm Darwish's account that fighters themselves had left.

The Syria fight against ISIS is taking place in the midst of a multi-sided five-year civil war that has killed hundreds of thousands and made millions homeless.

Russia and the United States, both enemies of ISIS, support opposing sides in the wider conflict and are leading separate air campaigns. They have cooperated since last year on diplomacy to end the wider war, largely fruitlessly.

The SDF and its Kurdish faction have proven to be the first US allies on the ground in Syria that are effective against ISIS, and have been bearing towards the militants' Syrian capital Raqqa. The Syrian government has also been advancing in the area with Russian support, in what some of its allies call a "race to Raqqa" to prevent US allies from dominating territory won from ISIS.

Russian and Syrian government warplanes killed at least 17 people in an air raid on a market in an ISIS-held town in the eastern province of Deir al-Zor on Monday, the Observatory reported. The province links ISIS's Syrian territories with its Iraq strongholds futher down the Euphrates.

A Syrian military source said the army had captured a crossroads in its latest offensive, from which it could advance towards Raqqa, Deir al-Zor or eastern Aleppo.

In Iraq, Washington's main target is Mosul, a northern city that held 2 million people before it fell to ISIS two years ago. US planners hope Mosul can be taken this year by a combination of Iraqi government forces and security forces from Iraq's Kurdish autonomous region.

But the Shia-led Baghdad government veered from the plan two weeks ago with the announcement that its next offensive would be just west of Baghdad in Falluja, a Sunni bastion where US troops faced the bloodiest battles of their own 2003-2011 occupation.

Iraqi army troops poured into a rural district of Falluja a week ago, but halted at the outskirts of built-up areas, with Prime Minister Abadi saying the assault would be slowed to protect civilians.

Shia militia criticised Abadi's decision to slow the advance. They say Falluja is a more urgent target than Mosul because of its proximity to the capital, where a campaign of suicide bombings has escalated in recent weeks.

Washington worries that the Iraqi army could become bogged down in Falluja and a protracted battle there could worsen sectarian hostility, especially if the Shia join the fight.
Abadi depends on powerful politicians linked to the militia for his ruling coalition. He has tried to remove some from senior government posts, but faces resistance in parliament.

The head of the largest militia, former government minister Hadi al-Amiri, criticised the army for moving a brigade to an area near Mosul while the battle for Falluja was still under way, saying the decision was taken under US pressure.

"Unfortunately there is an absence of precise planning for the military operations," said Amiri, who leads the Badr Organisation. "I believe that sending a large number of armoured vehicles and assets to Makhmour, under the pretext of the Mosul battle, is a betrayal of the battle for Falluja," he told Al-Sumaria TV.

Iraqi army officers confirmed a brigade had arrived on Sunday night in Makhmour, a staging point for a future assault on Mosul. Troops would prepare for an offensive to take an airfield across the Tigris River, and bridges and boats had been brought to facilitate the crossing.

Iraqi armed forces spokesman Brigadier General Yahya Rasool told Reuters the mobilisation near Mosul would not subtract from the campaign in Falluja.

"The forces allocated to Falluja are achieving victories and we have started moving towards the city centre."
© Thomson Reuters 2016
Comments
ISISSyrian fightersSyria unrestManbij