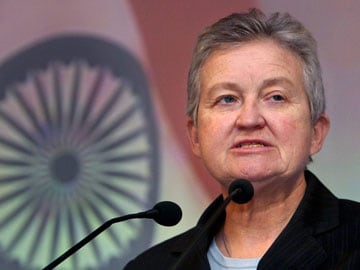 New Delhi: US ambassador to India Nancy Powell has resigned and will return to the United States, an embassy statement said on Monday, following a diplomatic row that strained relations between the world's biggest democracies.

"US Ambassador to India Nancy J Powell announced in a US Mission Town Hall meeting March 31 that she has submitted her resignation to President Obama and, as planned for some time, will retire to her home in Delaware before the end of May," an announcement in the US Embassy website said tonight. (Foreign media on Nancy Powell's resignation)

There was media speculation a week ago that Ms Powell would be replaced with a political appointment by the Obama administration. The report had said Ms Powell had dragged her heels on meeting Gujarat Chief Minister Narendra Modi and was perceived as being "too close" to the UPA's foreign policy establishment.

However, when Washington decided to warm upto Mr Modi, perceived as one of the frontrunners for the Prime Minister's post, Ms Powell met Mr Modi on February 13, ending a nine-year-old boycott of the Gujarat leader on the issue of 2002 riots. The US move marked a U-turn in its earlier stand of having nothing to do with Mr Modi, whose visa it cancelled in 2005.

The US embassy statement did not give a reason why Ambassador Nancy Powell had resigned, saying only that she would retire from the foreign service after a 37 year career. Embassy sources did not want to hazard a guess on the decision of the 67-year-old career service officer to quit her post at a time when India is in an election process and Washington is also deeply interested in its outcome.

Promoted
Listen to the latest songs, only on JioSaavn.com
The Obama Administration, however, refuted reports that Ms Powell has resigned because of differences with it and instead said she is ending a distinguished thirty-seven year career. "Not any truth to your question about differences - she is retiring after 37 years of service," State Department Deputy Spokesperson Marie Harf.

"She (Powell) is ending a distinguished thirty-seven year career that has included postings as US Ambassador to Uganda, Ghana, Pakistan, Nepal and India as well as service in Canada, Togo, Bangladesh, and Washington, where she was most recently Director General of the Foreign Service," Ms Harf added.