Under Trump, More Than 200,000 Foreign Spouses Could Lose Their Right To Work 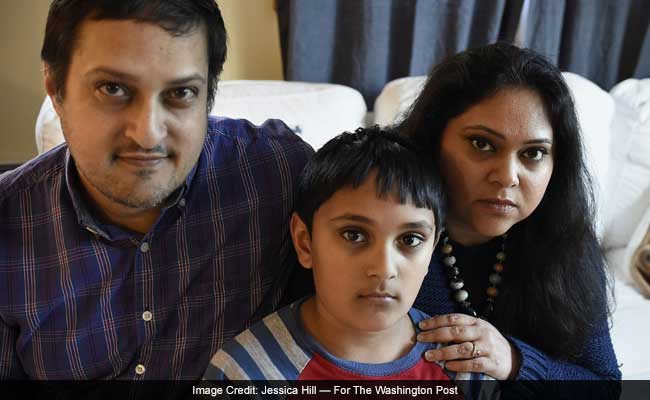 Sudarshana Sengupta with her husband Sadhak and son Josh at their home in Sharon.

Sudarshana Sengupta used to consider herself an immigrant success story. A scientist on the verge of launching a start-up, she thought she had checked all the right boxes on her way to achieving the American Dream. She works at a university lab, pays taxes and has begun the lengthy process of becoming a permanent resident.

But what once looked like a glittering future is now in jeopardy.

The Trump administration said this week that it was considering whether to revoke an Obama-era rule that allows some spouses of "high-skilled" foreign workers to also hold jobs in the United States.

The move - stripping away privileges granted by Obama in 2015 - would make it impossible for Sengupta and an estimated 200,000 others with similar immigration status to stay in their jobs.

It comes as the Trump administration weighs its response to a lawsuit brought against the federal government by a group of IT workers in California, who argue that the spousal visas hurt American workers. 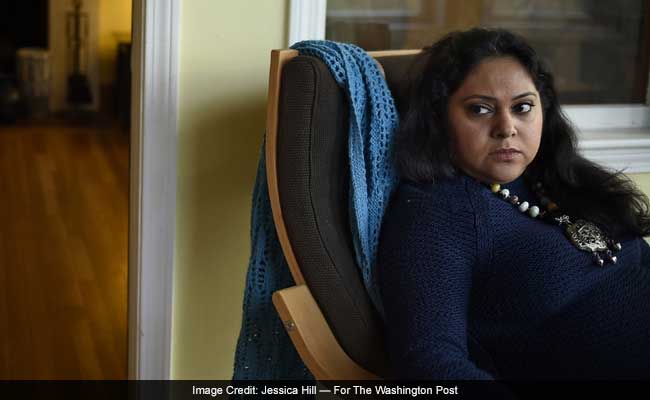 Most of those faced with losing their right to work - if the Trump administration revokes the authorizations - would be women like Sengupta, highly educated wives who in many cases gave up their own "high-skilled" H-1B visas for the spousal work permits.

"I followed all the rules, jumped through all the hoops," said Sengupta, a 43-year-old biomedical researcher. "I do not want to move back to India just so I can work. I cannot abandon my son and my husband."

The work authorizations for spouses on H-4 dependent visas are more flexible than the H-1B visas because they are not bound to a single employer. The unrestricted work permits are similar to those granted to other visa-holder spouses - such as those married to foreign workers employed by multinational companies. But in those cases, the employment rights were authorized by Congress, not the president.

The Obama administration had extended work privileges to spouses of one of the most sought-after classes of foreign workers - the "high-skilled" workers who staff the tech and science industries - as an incentive for these workers to complete the green card process and stay in the United States.

While there may be humanitarian reasons to allow these spouses to contribute financially to their households, some economists say the policy is unfair. 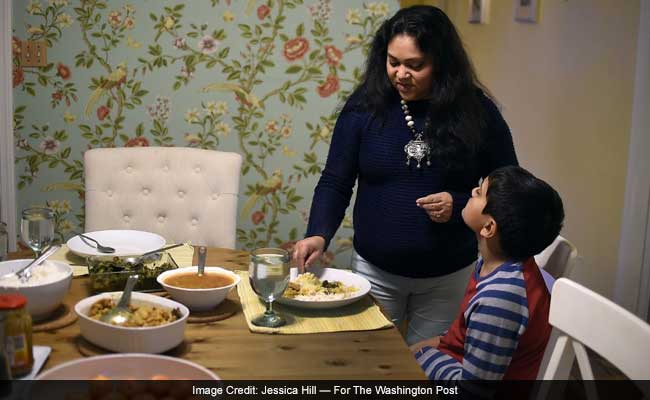 Sudarshana Sengupta with her son Josh.

"It's difficult for modern couples to not have spouses who want to work, but it's not in the interest of the American workforce to bring in more workers," said Peter Cappelli, an economist and management professor at the Wharton School at the University of Pennsylvania. "Nobody would make the argument that just because you can work, you can come to the United States. That's the situation here - somebody coming in who may not be able to pass the usual hurdle."

Sengupta never envisioned putting her career at risk when, at age 28, she moved from Kolkata, India, to Louisville, Ky., in 2002 so her husband, Sadhak, could start a postdoctoral fellowship.

"We decided that the United States had better opportunities for scientists than India," Sengupta said. "There's an environment of innovation here that does not exist anywhere else."

Once she secured a work permit as the spouse of a visiting scholar, she volunteered at a university lab until she landed a paid position. She and her husband applied for H-1B visas in 2005 - the first step in the arduous green card process - when they decided to try to settle permanently in the United States. Her husband filed an immigrant visa petition, which was approved in 2010 - putting the family in the pipeline for their green cards.

Indian H-1B holders face waits of more than a decade for their green cards because of a per-country cap and high demand. Indians account for more than 70 percent of H-1B visa recipients.

After short stints in Chicago and Indianapolis, where Sengupta worked at various universities, the couple moved to the Boston area in 2011. Her husband is the director of the brain tumor immunotherapy research program at Rhode Island Hospital, affiliated with Brown University. She had a job at a Harvard-affiliated teaching hospital.

Workers on H-1B visas who have begun the green card process can renew their work visas indefinitely - but not their spouses. Sengupta did not start her own process to obtain a green card because she knew she would eventually get one through her husband. But her H-1B visa expired in 2013, making her ineligible to work.

"It was devastating. I had never not worked in my life," she said. "Financially, it was draining, but it took an even bigger toll emotionally."

Sengupta began thinking about starting her own company, but the family's savings were depleted when they became a single-income household.

She got a reprieve in 2015 when the Obama administration allowed spouses of H-1B visa holders waiting for green cards to work.

Sengupta got a part-time job as a research scientist at Roger Williams Medical Center in Providence, and devoted the rest of her time to launching a company with a biostatistician to predict rare cancers using an algorithm and cancer detection strategies she has spent years researching.

But another curveball soon landed.

A group of IT workers laid off by a California utility company and replaced with foreign workers on H-1B visas sued the Department of Homeland Security in 2015. The IT workers, who filed suit as Save Jobs USA, argued that the spousal work authorization endangered American workers by further increasing competition for jobs.

A lower court dismissed the case in 2016, ruling that Save Jobs USA failed to show that it would be harmed by the spousal work provisions. Save Jobs USA appealed. Now the group's attorney, John Miano, said he's hopeful that President Donald Trump will rescind the provision.

"We have this H-1B program, which in theory has protections for American workers," he said. "But then we tell the spouses, 'Oh, you can work with no restrictions at all.' They are not restricted to highly skilled jobs. They can break strikes. They can do anything."

The attorney has testified half a dozen times before Congress at the behest of congressional Republicans, including then-Sen. Jeff Sessions of Alabama, who objected to Obama's expansion of foreign worker programs. Sessions had also alarmed immigration advocates and the tech industry when he said, while campaigning for Trump, that he would consider eliminating H-1B visas altogether.

A draft executive order leaked in January suggested that Trump would revisit existing regulations authorizing foreigners to work. That has not been signed.

The Trump administration, shortly after his inauguration, had requested that the legal case over the spousal work provisions be paused for 60 days to allow the new leadership time to consider the issue. That deadline was Monday. Instead of filing a brief urging the court to uphold the rule, the Justice Department asked the U.S. Court of Appeals for the D.C. Circuit to put the legal proceedings on hold for six more months, until Sept. 27, so it could "actively reconsider" the provision.

As attorney general, Sessions can choose not to defend the spousal work provision.

Sarah Isgur Flores, a spokeswoman for the Justice Department, said that "the administration is committed to protecting American workers under the law," but would not comment on its plans.

Save Jobs USA objected to any further delay and filed a motion asking the court to schedule oral arguments as soon as possible.

Sengupta - along with Immigration Voice, a nonprofit group advocating on behalf of high-skilled foreign workers - has filed a motion to intervene in the court case in the event the Trump administration does not defend the provision.

Some immigration advocates are not optimistic about the future of the H-4 spousal work authorization.

"The administration, and the Department of Justice in particular, is looking for any opportunity to end legal immigration as we know it to the United States," said Ali Noorani, executive director of National Immigration Forum, a Washington lobby group. "The administration is on track to keep engineers out of the country and really diminish or dismiss the value of their spouses, who are also contributing to the economy."

Sengupta, in the meantime, remains in limbo. She continues pitching her start-up to investors, and says she has several lined up. But they will wait only so long. And so her plans to hire three American scientists are also on hold.

"If I launch my company today, we don't know what's going to happen a year and a half from now," Sengupta said.

If Trump revokes her permission to work, she said she would quit her lab job and put her start-up plans on hold until her green card comes through - which could take years.

Sengupta mused that perhaps she and her husband would uproot their 9-year-old son, Josh, who was born in Indianapolis and is a U.S. citizen, and move to Canada. Or somewhere else more welcoming to immigrants.

Promoted
Listen to the latest songs, only on JioSaavn.com
"This was supposed to be the country where if you worked hard, you got ahead and reap the rewards," she said. "But that has all become futile now. You work hard, but it might just all go away."

(This story has not been edited by NDTV staff and is auto-generated from a syndicated feed.)
Comments
Sudarshana SenguptaDonald TrumpTrump administrationH-4 dependent visasH-1B visas