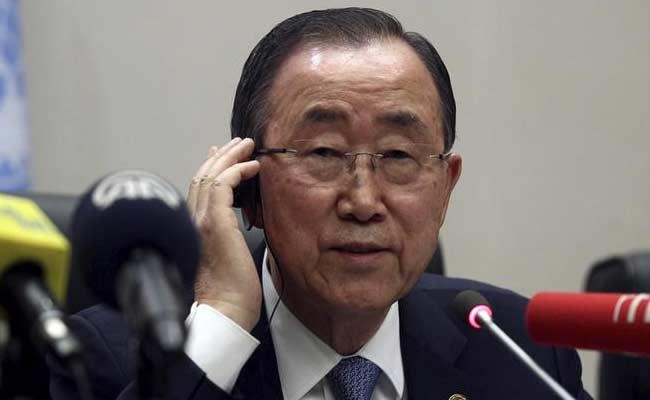 UN chief Ban Ki-moon called today for the US, China and other nuclear-armed states to end the "madness" of atomic testing. (File Photo)

Vienna, AUSTRIA: UN chief Ban Ki-moon called today for the US, China and other nuclear-armed states to end the "madness" of atomic testing by finally ratifying the Comprehensive Nuclear-Test-Ban Treaty, which turns 20 this year.

"Nuclear testing poisons water, causes cancers and pollutes the area with radioactive fallout for generations and generations to come," he said.

"We are here to honour the victims. The best tribute to them is action, to ban and to stop nuclear testing. Their sufferings should teach the world to end this madness."

The CTBT, which was adopted by the UN General Assembly in September 1996, bans all nuclear explosions.

It has been signed by 183 states and ratified by 164 including Russia, France and Britain, three of the nine countries which have, or are thought to have, nuclear weapons.

But to enter in force, the treaty needs 44 particular "nuclear technology holder" states to ratify it, eight of whom have yet to do so.

These eight include the other six in the nuclear club -- the United States, China, India, Pakistan, North Korea and Israel -- as well as Iran and Egypt.

The US, China, Egypt, Iran and Israel -- the latter widely assumed to have nuclear weapons although it has never confirmed it -- have signed the treaty but not ratified it.

US President Barack Obama said in a major speech on nuclear weapons in Prague in 2009, shortly after taking office, that he would "immediately and aggressively pursue US ratification".

Seven years later, with Obama leaving office in January 2017 and the opposition Republicans controlling both houses of Congress, the issue appears to have been put on on the back burner.

Despite this de-facto "moratorium" on testing outside of North Korea, however, Ban said it would "never substitute for the legally binding CTBT".

The US was one of first countries to sign the CTBT in 1996, with then-president Bill Clinton calling it the "longest-sought, hardest-fought prize in arms control history".

But a push in 1999 to ratify the treaty in Congress failed, in what Arms Control Association analyst Daryl Kimball says was a "highly partisan and rushed vote".

"Since then, US partisan politics have prevented the United States from reconsidering the treaty. US inaction has, in turn, given the leaders of the seven other (holdout) states... an excuse for delay," Kimball told AFP.

Opposition from US lawmakers in 1999 was due in part to concerns that there was no international system of monitoring in place to make sure there was no illicit testing of nuclear weapons.

But in fact the Preparatory Commission for the Comprehensive Nuclear-Test-Ban Treaty Organization (CTBTO), the Vienna body set up to prepare for the treaty's entry into force, already has several hundred test detection stations in operation.

"Today, the questions that led many senators to vote 'No' have been answered and the CTBT is very much in the US security interests," Kimball said.

China's ambassador to UN in Vienna, speaking at the same event as Ban, said that the Chinese government "has consistently expressed its close support of the CTBT and we are trying hard to try to ratify the treaty as soon as possible."

He said however that there was opposition in the National People's Congress, China's equivalent of a parliament.