The couple, Priya and Nadesalingam along with their Australian-born daughters were moved to Christmas Island late August after an attempt to deport them. 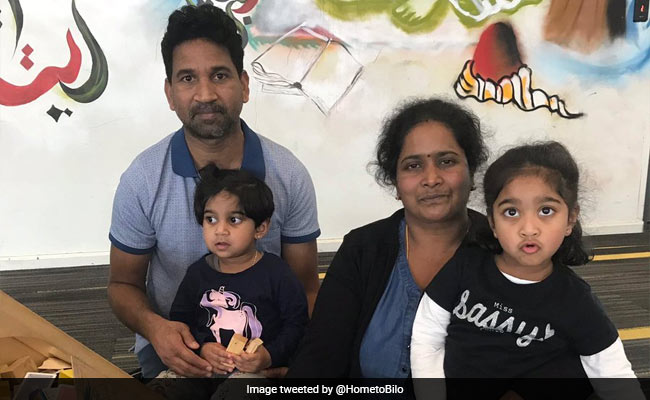 UN has asked the Australian government to release the Tamil family

The UN has asked the Australian government to release the Tamil family, fighting deportation to Sri Lanka, from offshore detention into a "community setting arrangement" to find another way to end their existing situation.

The couple, Priya and Nadesalingam along with their Australian-born daughters were moved to Christmas Island late August after an attempt to deport them was dramatically blocked by a court injunction.

The couple arrived in Australia by boat separately in 2012 and 2013 seeking asylum. Their daughters, born in Australia, have never been to Sri Lanka. The family was settled in the central Queensland suburb of Biloela until they were placed in immigration detention in Melbourne in March 2018.

They were flown to Christmas Island after a last-minute injunction stopped them from being deported late last month.

Two UN Human Rights Committee (UNHRC) special rapporteurs have told the family's lawyer they have sought Australia the transfer of the two year old daughter Tharunica and her family "into a community setting arrangement to find another way to end their existing situation of detention", the ABC news reported on the basis of a letter seen by the organisation.

The future of the family is now resting on the Tharunica's case which the Federal Court has agreed to hear in full but no hearing date has been set.

Her immigration lawyer Carina Ford was on Wednesday notified by the UNHRC that it would use interim measure for the Australian government to release the family into community detention, the report said.

Ford had applied for the interim relief orders from the UN on Friday under the International Covenant on Civil and Political Rights.

However, she was aware that the government does not have to abide the request.

"We're not naive to the fact it doesn't have to be followed," Ford was quoted as saying in the media report.

Australia is a signatory to the International Covenant on Civil and Political Rights, but the UN cannot force the Government to comply with the request, the report said.

She hoped the family would be returned to their town of Biloela while the case continues to be heard.

A spokesperson for the Australian Department of Home Affairs said it was "aware an interim measures request has been issued by UNHCR", the report said.

"The family are residing on Christmas Island and will remain there whilst the judicial review proceedings are before the court," the spokesperson said.

(Except for the headline, this story has not been edited by NDTV staff and is published from a syndicated feed.)
Comments
UNAustralian governmentTamil family