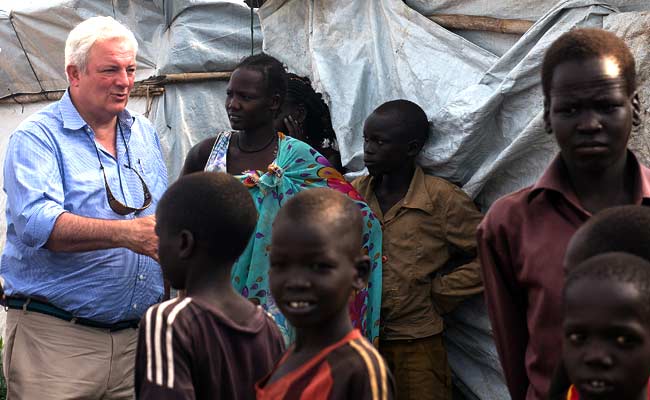 Juba: UN aid chief Stephen O'Brien warned today of the "devastating" toll on civilians in South Sudan, as he witnessed the impact of 19 months of a civil war marked by atrocities.

O'Brien is on a four-day visit to see "first-hand the humanitarian consequences of the conflict, and efforts by aid organizations to respond to escalating needs," according to a UN statement which warned hunger levels were rising.

"The food security situation is alarming," the statement added. "Nearly 70 per cent of the country's population -- 7.9 million out of 11.6 million people -- are expected to face food insecurity this rainy season."

O'Brien, the UN Under-Secretary-General for Humanitarian Affairs, met on Wednesday with some of the 166,000 civilians crammed into UN peacekeeping bases, many of them since the war began in December 2013, too fearful to venture out in case of reprisal attacks.

"From speaking to communities displaced in Juba, it's clear the brutal war has taken a devastating toll," he said, after touring the camp in Juba where aid workers are struggling to stamp out a cholera outbreak that has killed at least 39 people.

South Sudan's civil war began in December 2013 when President Salva Kiir accused his former deputy Riek Machar of planning a coup, setting off a cycle of retaliatory killings that has split the poverty-stricken, landlocked country along ethnic lines.

Tens of thousands have died in the war, according to the UN, but no official death toll has been kept.

O'Brien is due to visit the UN base in Bentiu, capital of the northern battleground state of Unity, where over 100,000 civilians are sheltering inside a camp, more than the destroyed town itself.

War has forced 2.2 million people to flee their homes, with over 600,000 of those now refugees in the neighbouring nations of Ethiopia, Kenya, Sudan and Uganda.