These cubs have survived drone attacks, bombings and were transported to Poland in October. 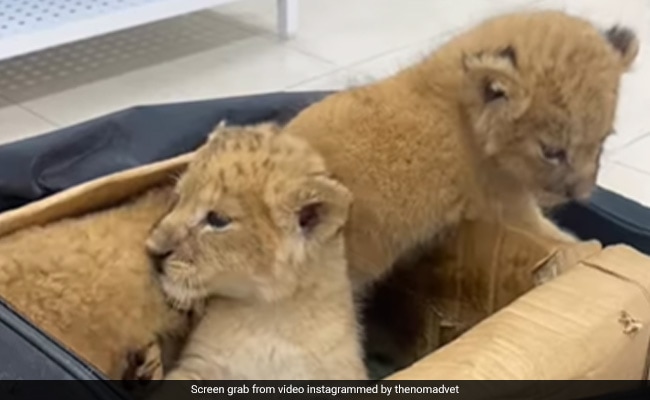 The flight from Poland to Minnesota took nine hours.

Four lion cubs, who were abandoned and also faced the brunt of Ukraine- Russia War, have found a safe home in an animal sanctuary in Minnesota, United States, according to the International Fund for Animal Welfare.

Out of the four, three are female cubs named Stefania, Lesya and Prada while a male cub is named Taras. All of them are four to five months old and have spent the last three weeks at the Poznan Zoo in Poland, recovering from their 36-hour journey out of Ukraine, it was further reported. These cubs have survived drone attacks, bombings and were transported to Poland in October.

Meredith Whitney, Wildlife Rescue Program Manager at the International Fund for Animal Welfare said, "These cubs have endured more in their short lives than any animal should." She added, "They were born at breeding facilities in Ukraine, during the war and then orphaned at a few weeks old."

The flight from Poland to Minnesota took nine hours and was sponsored in part by the Andrew Sabin Foundation. "International regulations for transporting animals require temperature thresholds and the space for the cubs on the plane was pressurized and temperature controlled. Dr Kushnir, who was a pivotal part of their rescue, care and transport out of Ukraine, traveled with the cubs to the US," it was further informed by the International Fund for Animal Welfare.

The flight landed on November 29 and once they cleared customs, they were met by care staff to transport the cubs from the airport to the sanctuary. According to ABC News, these cubs were flown into the U.S. in wooden crates explicitly designed for them. Further, once they reached the sanctuary, they were immediately unloaded into a warm indoor enclosure with plenty of food, water and toys.

Dr Andrew Kushnir, an American veterinarian shared the journey of the cubs on his official Instagram page. "Getting these cubs out of Ukraine during war has been one of the most challenging and beautiful experiences of my Life and I'll miss looking after them deeply," he wrote in the caption.

Since being shared, the video has over 7,000 likes. One user commented, "Crying. Thank you for all you've done and all you will continue to do. You're all amazing."

"Yayyyy Andrew!!! You and the cubs made it safely home in the US!! this is just so heartwarming! Thank you to you and all the team members who made this happen!" another one added.