Russia-Ukraine war: The shelling of hospitals has turned the situation grim as availability of medical supplies has been severely hit. 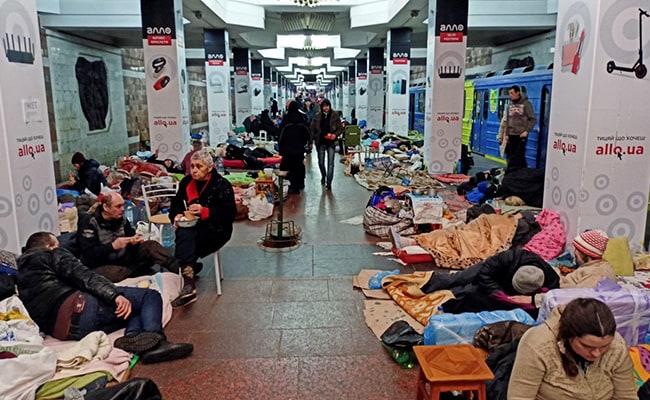 Ukraine has already been battered by the war triggered by Russian invasion. And now, the doctors fear a surge not only in cases of COVID-19, but also other infectious diseases like polio, cholera and measles.

Kate White, an emergency program manager for Doctors Without Borders, told CNN that Ukraine already had low vaccination rates against those diseases.

"In terms of what we call vaccine-preventable diseases, the status in Ukraine was that the population was not vaccinated to the extent which you would get herd immunity like you would in many other European countries or in the US," White said.

She added that the additional strain on Ukraine's healthcare system due to the war will further lead to a huge drop in routine immunisation numbers.

Some threats - like the spread of Covid-19 - are immediate because people are huddled in basements, subway stations and temporary shelters to protect themselves from bombardment. These places do not have proper access to clean water and sanitation, which the doctors point out could lead to rise in diarrhoeal diseases.

“I am very, very worried for Ukraine. First and foremost, that this may lead to a long-term conflict that will completely destroy the health system,” Lucica Ditiu, executive director of the Stop TB Partnership in Geneva, told Nature.

The Russian forces are concentrating their firepower in Mariupol, where the conditions are “unbearable” and “just hell”, according to White. "Ukraine was the last country within Europe to have a cholera outbreak in 2011, and that was in Mariupol," she said.

The Humans Right Watch (HRW) recently said in a report that Mariupol has not had access to running water, electricity or heat since March 2, when Russian forces surrounded it. The city, which has a population of half a million, sits on the mouth of the Kalmius River, which has dangerously high levels of pollution, according to the World Wildlife Fund (WWF).

The water treatment plants here run on electricity, which has been cut off.

The members of Doctors Without Borders are collecting rainwater and snow to provide clean water to the people of the city.

The shelling of hospitals has turned the situation grim as availability of medical supplies has been severely hit. Pharmacies too are either empty or forced to shut down and people with chronic diseases have lost access to their medications.