Ukrainian-appointed governor Oleksandr Starukh said rescue operation was still underway and at least five people were trapped under the rubble. 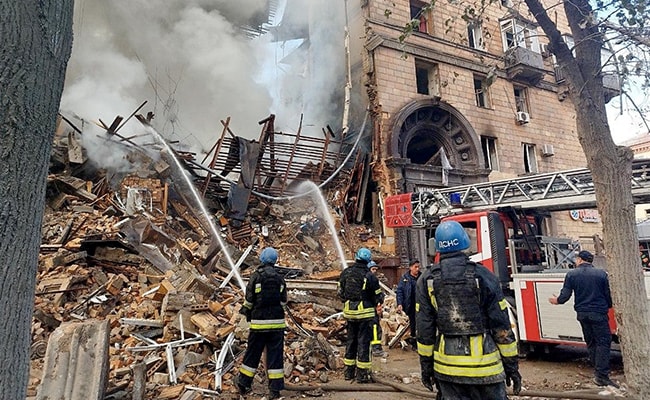 At least two people died and five others were missing in attacks on Ukraine's southeastern city of Zaporizhzhia, the region's governor said Thursday, blaming Russia for the strikes.

The Ukrainian-controlled city is located in the eponymous Zaporizhzhia region, also home to the Russian-occupied nuclear plant that has been the site of heavy shelling.

Moscow annexed the region this week, despite not having full control of it.

"One woman died and another person died in an ambulance," Ukrainian-appointed governor Oleksandr Starukh said on social media.

He added that at least five people were trapped under the rubble following the attacks.

"Many people" were saved in a rescue operation that was still underway, he said.

Earlier, Starukh posted a photo of a collapsed building with smoke still rising from the wreckage.

He said there were seven attacks fired by Russian forces at "high-rise buildings".

Last week Ukraine said at least 30 people were killed after a convoy of civilian cars in the Zaporizhzhia region was shelled in an attack Kyiv blamed on Moscow.

Putin on Wednesday finalised the annexation of four Ukrainian territories -- Donetsk, Lugansk, Zaporizhzhia and Kherson -- but the Kremlin is yet to confirm what areas of those regions are being annexed.

Ukraine's presidency said Thursday that over the past day 14 people were killed in attacks in the Donetsk region.