Ukraine War: Warning about the possible bombing by Russia, the Ukraine president said Russians have always come to Odessa and felt only warmth. 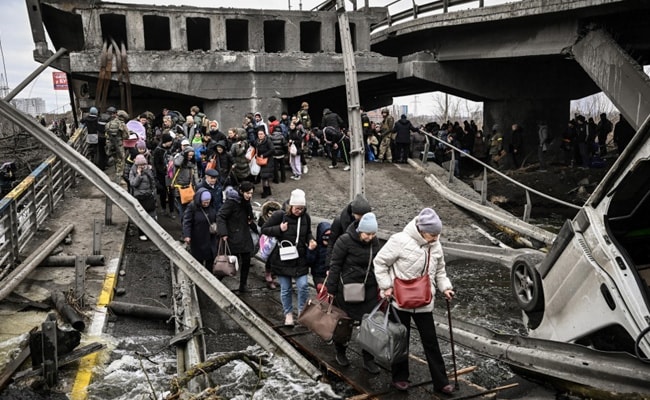 Ukraine War: The Ukraine president said it will be a war crime if Russia bombs Odessa. (File)

"They are preparing to bomb Odessa. Odessa!" he declared, in a video address.

Russian forces have made progress in southern Ukraine since their February 24 invasion, overrunning the city of Kherson and besieging the port of Mariupol, but Odessa has so far been largely spared.

Almost a million people live in Odessa, a cosmopolitan harbour on Ukraine's southern coast with both Ukrainian and Russian speakers and Bulgarian and Jewish minorities.

On Sunday, there were multiple military checkpoints at the entry to the city, but the streets themselves were calm and largely empty.

Irina and Alexander Pivovartchik, a couple in their 50s returning home with their shopping, were unmoved: "We will survive! Tonight we'll lock the door and we'll have dinner as usual."

Local student Anastasia, admitted that locals had grown used to air raid sirens and no longer jumped for cover, after a week-and-a-half of no attack in the city since the war began.

Mykhailo Shmushkovich, the city official in charge of European solidarity, said more than 100,000 citizens had fled Odessa but that the city's defenders would fight.

"It could happen any moment. You can't ever be ready for that," he told news agency AFP.

"Even before Zelensky told us that Russians would bomb Odessa, we were in the mood to fight until the end. We are ready to fight," he said.

The Russian advance from occupied Crimea has in part turned east to link up with Russian-backed separatists and to seize the Azov Sea port of Mariupol.

But another part of the force has also headed west to Kherson, on the road towards Odessa. The city is also close to the Moldovan border and the Russian-occupied region of Transnistria.

During the first 11 days of the conflict, Russian forces from Belarus have also advanced on the capital Kyiv from the northwest and northeast, while another group bombarded the northern city of Kharkiv.

Several cities have been bombed and shelled and the UN estimates that more than 1.5 million civilians have been driven from their homes by the fighting.