Since Russian President Vladimir Putin launched the assault on Feb. 24, Russian forces have taken heavy losses and their advance has largely stalled, with long columns of troops that bore down on Kyiv halted at its suburbs. 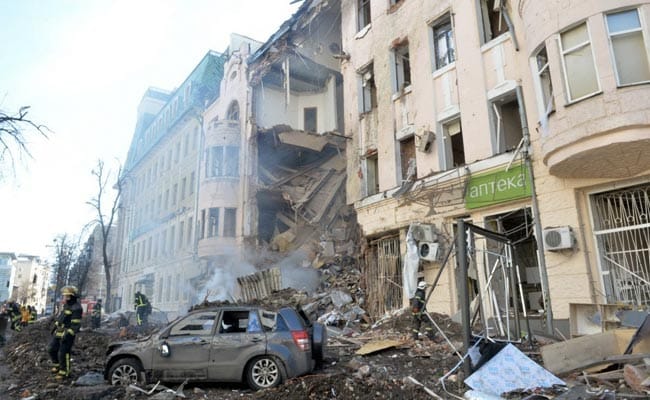 Kyiv and Moscow reported some progress in talks this week (File)

President Volodymyr Zelenskiy called on Saturday for comprehensive peace talks with Moscow to stop its invasion of Ukraine, saying it would otherwise take Russia "several generations" to recover from its losses in the war.

Since Russian President Vladimir Putin launched the assault on Feb. 24, Russian forces have taken heavy losses and their advance has largely stalled, with long columns of troops that bore down on Kyiv halted at its suburbs.

However they have laid siege to cities, blasting urban areas to rubble, and in recent days have intensified missile attacks on scattered targets in western Ukraine, away from the main battlefields in the north and east of the country.

On Saturday Russia's defence ministry said it had destroyed a large underground depot for missiles and aircraft ammunition in the western Ivano-Frankivsk region using hypersonic weapons, missiles that can travel at five times the speed of sound or faster.

Missiles also destroyed Ukrainian military radio and reconnaissance centres near the port of Odessa, the Interfax news agency quoted the ministry as saying.

Reuters was unable to independently verify the reports. Zelenskiy's office did not immediately respond to a request for comment.

Ukrainian authorities said on Saturday they have not seen any significant shifts over the past 24 hours in front line areas, noting cities of Mariupol, Mykolaiv and Kherson in the south and Izyum in the east saw particularly heavy fighting.

More than 3.3 million refugees have already fled Ukraine through its western border, with 2 more million displaced inside the country. Efforts to evacuate civilians from cities under siege through "humanitarian corridors" continued.

Ukrainian authorities said they hoped to open 10 such corridors on Saturday.

Unprecedented Western sanctions aimed at crippling Russia's economy and starving its war machine have yet to halt what Putin calls a "special operation" to disarm its neighbour and purge it of "Nazis". Kyiv and its allies have called this a baseless pretext for war.

Ukraine's defence ministry acknowledged on Friday it had "temporarily" lost access to the Azov Sea, a strategic link with the Black Sea, after Russia said it was "tightening the noose" around the besieged southern port of Mariupol.

Hundreds of thousands have been trapped there for over two weeks with electricity, water and heat supplies cut off. Its Soviet-era apartment blocks blasted into burned out shells and covered-up uncollected bodies amid the rubble a common sight. Local officials say fighting has reached the city centre while heavy shelling keeps humanitarian aid from getting in.

Rescue workers were still searching for survivors of a Mariupol theatre that local authorities say was flattened by Russian air strikes on Wednesday. Russia denies hitting the theatre and says it is not targeting civilians.

In defiant mood, Putin on Friday promised flag-waving crowds at a soccer stadium in Moscow that Russia would "absolutely accomplish all of our plans".

Zelenskiy said refusal to compromise would come at a steep price.

"I want everyone to hear me now, especially in Moscow. The time has come for a meeting, it is time to talk," he said in a video address early on Saturday. "The time has come to restore territorial integrity and justice for Ukraine. Otherwise, Russia's losses will be such that it will take you several generations to recover."

Russia last acknowledged on March 2 that nearly 500 of its soldiers had been killed; Ukraine says the number by now has reached many thousands. Reuters has not been able to independently verify the death count.

PREPARING FOR THAT DAY

Western analysts say Moscow seems to have underestimated the resistance it faced in Ukraine, where civilians who never fired a weapon until a few weeks ago joined regular forces to defend their country.

In a training facility in Odessa, a picturesque Black Sea port and a vibrant cultural centre, young urban professionals were learning about handling weapons and applying first aid to battlefield wounds.

"Every person should know how to fight, how to make medicine, aid for your relatives or other people," said 26-year-old graphic designer Olga Moroz. She was training alongside her boyfriend, 32-year-old sales manager Maxim Yavtushenko.

The facility has been training 80 to 150 people a day, all trying to prepare for that day Russian troops pressing closer to the city might finally arrive.

Kyiv and Moscow reported some progress in talks this week towards a political formula that would guarantee Ukraine's security, while keeping it outside NATO, though both sides accused each other of dragging things out.

While Russia has been isolated by sanctions and ostracised diplomatically, China is the one big power that has not condemned the assault. The United States is concerned a lifeline from Beijing could make international pressure less effective.

In a video call on Friday, President Joe Biden told China's President Xi Jinping there would be "consequences" if Beijing provided "material support" to Russia in Ukraine, the White House said, and added sanctions were an option.

Both Russia and China deny discussing military aid and Beijing says it wants to see an end to the conflict.