"If There's An Explosion, End of Europe": Ukraine On N-Plant Attack

Emergency services said a fire that broke out in a training complex at the Zaporizhzhia plant had been extinguished and there were no injuries. 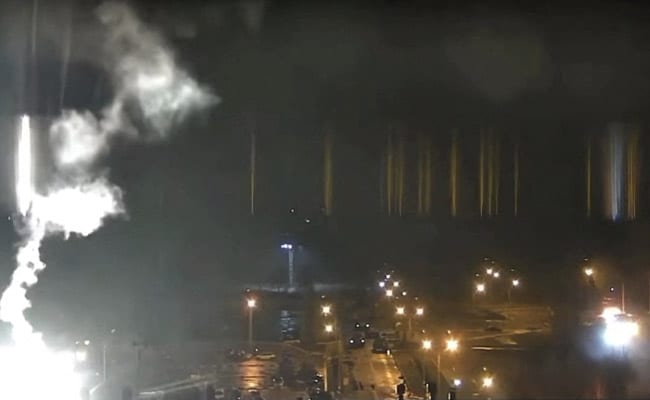 Emergency services said a fire that broke out in a training complex at the Zaporizhzhia plant had been extinguished and there were no injuries. Ukraine told the International Atomic Energy Agency the blaze had "not affected 'essential' equipment," and that there had been no change reported in radiation levels.

A missile had hit the nuclear plant's unit no. 1, and the Ukraine government is seeking more clarity on any damage, Energy Minister Herman Halushchenko told Bloomberg Television early Friday.

President Joe Biden spoke with Ukrainian President Volodymyr Zelenskiy as reports emerged about the attack, and the leaders called on Russia "to cease its military activities in the area and to allow firefighters and emergency responders to access the site," according to a White House statement.

"Europe must wake up," Zelenskiy said in a video message early Friday, adding that he also spoke with U.K. Prime Minister Boris Johnson, German Chancellor Olaf Scholz and other leaders.

"If there is an explosion, it is the end of Europe," Zelenskiy added. "Only urgent Europe actions can stop Russian troops."

Knee-jerk losses in equity markets moderated as traders assessed the severity of the situation at the facility. S&P 500 Index futures were trading 0.9% lower, after earlier falling 1.7%. Gold pared earlier gains as demand for haven assets eased.

Mariano Grossi, the IAEA's director general, spoke with Ukrainian authorities and warned of "severe danger" if its reactors were hit. The site accounts for about 20% of the country's electricity, according to its website.

The fact fire had posed no immediate risk to reactors "does not in any way excuse the Russian troops for firing on this nuclear power plant facility and endangering not only Ukraine and the surrounding countries, but really Russia itself should there be some kind of explosion," Rose Gottemoeller, a former NATO deputy secretary general, told Bloomberg Television in an interview. "It's one of those fratricidal situations that nobody, not even Vladimir Putin, should wish for."

While Ukrainain Foreign Minister Dmytro Kuleba warned of a disaster "10 times larger" than Chernobyl, analysts said that was unlikely. The nuclear reactors at Zaporizhzhia are of a different design, with a containment shell, and have since been upgraded to new regulations even after the Fukushima disaster.

"If there is no significant military damage to their multiple redundant safety systems, the reactors should remain in a safe stable state," said Lake Barrett, a former official at the U.S. Nuclear Regulatory Commission who was involved with the cleanup at the Three Mile Island nuclear power plant in the U.S.

The head of Ukraine's nuclear operator has said the plant's reactors, which are protected with thick metal and cement shells, are designed to withstand an aircraft crash. Nuclear plants are equipped with emergency response systems that should shut the reactors once they sense the vibrations from the attack, and have backup power systems in the case of a blackout.

The Zaporizhzhia power plant in the Ukrainian city of Enerhodar is home to six Soviet-designed 950-megawatt reactors built between 1984 and 1995, with capacity of 5.7 gigawatts, enough to power more than 4 million homes.

Phone calls to the power plant didn't connect, and plant officials didn't immediately respond to an email seeking comment on the situation.

In the days leading up to the strike, the International Atomic Energy Agency had considered a 30-kilometer exclusion zone surrounding all of Ukraine's reactors, acknowledging the unprecedented nature of combat taking place in and around the facilities. There's never before been a military attack on an operating nuclear plant, analysts said.