According to Bucha's deputy mayor, nearly 300 bodies of those killed during a month-long occupation by the Russian army had been buried in mass graves. 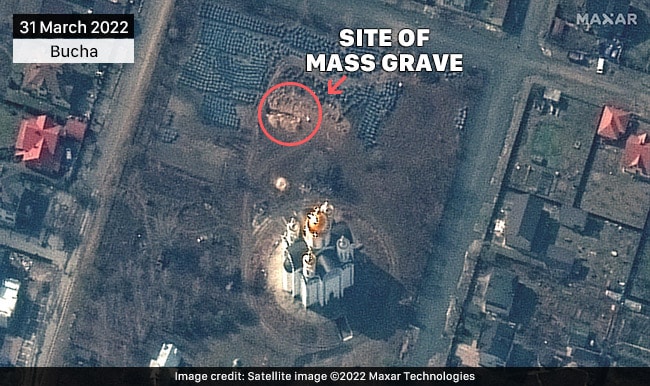 Nearly 300 bodies had been buried in mass graves in Bucha. High-res here

The latest satellite images by Maxar Technologies showed an approximately 45-foot-long trench dug into the grounds of a church in the Ukrainian town of Bucha where a mass grave was identified.

The images, captured on March 31, followed previous imagery from March 10 that show signs of excavation on the grounds of the Church of St. Andrew and Pyervozvannoho All Saints, Maxar Technologies said.

According to Bucha's deputy mayor, Taras Shapravskyi, nearly 300 bodies of those killed during a month-long occupation by the Russian army had been buried in mass graves in the ruined Kyiv suburb

Despite Russian denial of targeting civilians, condemnation was swift, with Western leaders, NATO and the United Nations voicing horror at reports of civilian murders in Bucha and elsewhere.

Ukraine's foreign minister called on the International Criminal Court to collect evidence of what he called Russian war crimes. The foreign ministers of France and Britain said their countries would support any such probe.

Ukrainian President Volodymyr Zelensky was unsparing in his nightly video message, warning "concentrated evil has come to our land". 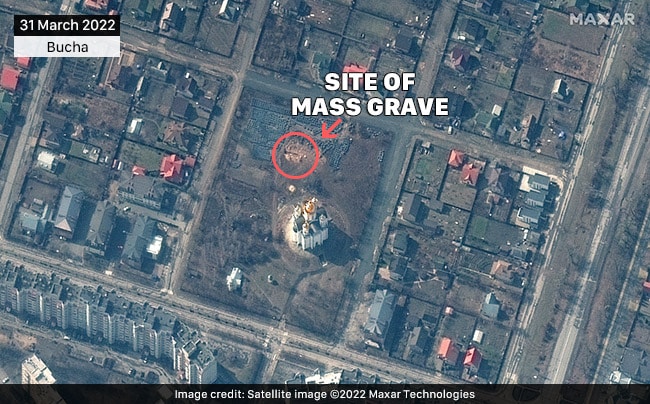 The image shows an approximately 45-foot-long trench dug into the grounds of a church in Bucha. High-res here

He described Russian troops as "murderers, torturers, rapists, looters, who call themselves the army and who deserve only death after what they did."

President Zelensky warned that the worst could be yet to come as Moscow refocuses its attention on the south and east of the country.

Russia, however, denied targeting civilians and said that all photographs and videos published by the Ukrainian authorities alleging "crimes" by Russian troops in Bucha were a "provocation," and no resident of Bucha suffered violence at the hands of Russian troops.