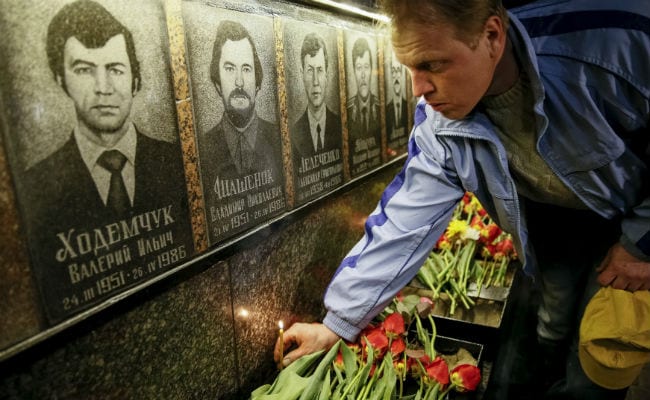 A man lights candles at a memorial, dedicated to firefighters and workers who died after the Chernobyl nuclear disaster, during a night service in the city of Slavutych, Ukraine, April 25, 2016. (Reuters)

KIEV: Ukraine prepared today to mark the 30th anniversary of the Chernobyl nuclear disaster, which permanently poisoned swathes of eastern Europe and highlighted the shortcomings of the secretive Soviet system.

In the early hours of April 26, 1986, a botched test at the nuclear plant in then-Soviet Ukraine triggered a meltdown that spewed deadly clouds of atomic material into the atmosphere, forcing tens of thousands of people from their homes.

The latest anniversary of the world's worst nuclear accident has garnered extra attention due to the imminent completion of a giant 1.5 billion euros ($1.7 billion) steel-clad arch that will enclose the stricken reactor site and prevent further leaks for the next 100 years.

The project was funded with donations from more than 40 governments. Ukrainian Prime Minister Volodymyr Groysman said lessons learned from Chernobyl should be heeded all over the world.

Over a half a million civilian and military personnel were drafted from across the former Soviet Union as so-called "liquidators" to clean-up and contain the nuclear fallout, according to the World Health Organization.

Thirty-one plant workers and firemen died in the immediate aftermath of the accident, mostly from acute radiation sickness.

Over the past three decades, thousands more have succumbed to radiation-related illnesses such as cancer, although the total death toll and long-term health effects remain a subject of intense debate.

Nikolay Chernyavskiy, 65, who worked at Chernobyl and later volunteered as a liquidator, recalls climbing to the roof of his apartment block in the nearby town of Prypyat to get a look at the plant after the accident.

"My son said 'Papa, Papa, I want to look too.' He's got to wear glasses now and I feel like it's my fault for letting him look," Chernyavskiy said.

Even with the new structure, the surrounding exclusion zone - 2,600 square km (1,000 square miles) of forest and marshland on the border of Ukraine and Belarus - will remain uninhabitable and closed to unsanctioned visitors.

The disaster and the government's reaction highlighted the flaws of the Soviet system with its unaccountable bureaucrats and entrenched culture of secrecy. For example, the evacuation order only came 36 hours after the accident.

Former Soviet leader Mikhail Gorbachev has said he considers Chernobyl one of the main nails in the coffin of the Soviet Union, which eventually collapsed in 1991.

Chernyavskiy's wife and four children were evacuated from the zone after the accident, but he doesn't regret his decision to stay behind or the health issues he suffers as a consequence.
"I would do it again," he said.
© Thomson Reuters 2016