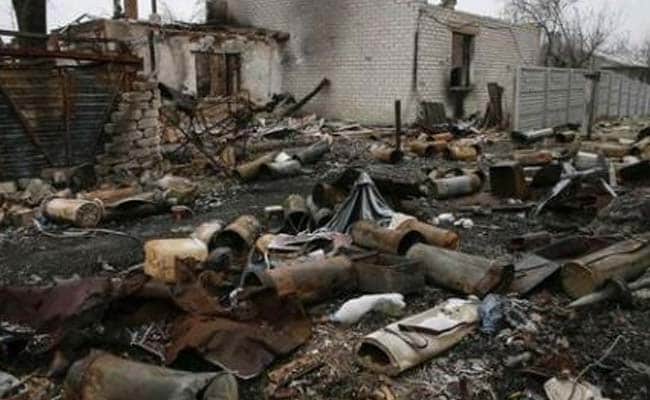 File Photo: The remains of ammunition is seen in front of a house damaged during fighting between rebels and Ukrainian government forces near Donetsk Airport. (Reuters)

Washington: The International Monetary Fund is far from being done with Ukraine, its latest mega-bailout client.

A new aid plan for Kiev - larger and longer - is under discussion and raises the risk for the global crisis lender as Ukraine sinks deeper into war against pro-Moscow separatists.

Less than a year ago, the IMF agreed to a $17 billion, two-year loan to help the country rebuild its finances and economy. But already that is proving not nearly enough.

The original program "was based on unrealistic economic and political assumptions and didn't take enough into account the impact of the war in the east," explained Lubomir Mitov, an expert on the Ukraine economy at the Institute of International Finance, the global banking lobby.

The Ukrainian authorities formally requested a new program from the IMF this week which could be stretched out over three or four years and, without doubt, will include more money.

That though would see the IMF doubling down on its bet on a country where security issues have only worsened since it first intervened last April.

Talks are well underway, with a proposal planned for submission to the IMF board expected by the end of the month. The IMF's own view has been that Kiev needs another $15 billion to keep it stable through the end of 2015.

"It's a risky but necessary decision to provide a little bit of a breathing room to the Ukrainian authorities," said Domenico Lombardi, a former member of the IMF board.

Lending into a war zone

The country has been choked by the loss of control to pro-Russia rebels of its key industrial region in the east, sapping productive output and revenues for the government.

A new IMF program "will allow us to gain access to additional resources, which in turn will enable us to return to economic growth, restore adequate foreign exchange reserves, and ensure economic and financial stability going forward," said Ukrainian Finance Minister Natalie Jaresko.

The challenge is immense both for the country and the IMF, for which it will be the fourth bailout plan in less than 10 years.

The Washington-based institution normally assists countries deep in financial crisis, such as Argentina in the early 2000s and Greece more recently.

With Ukraine it has to reach into its pockets for a country brought economically to its knees by nine months of civil war.

"In recent times it hasn't supported a country at war with such a substantial package."

The IMF did engage with Iraq in 2004 after the US invasion overthrew the government of Saddam Hussein. It also was involved in Sri Lanka during its civil war in 2001.

But it has not intervened with funds in a situation as uncertain as Ukraine's.

Peter Doyle, a former economist with the IMF and strong critic of its policies, said it would be a mistake, and that the IMF is being "compulsive" in a desire to "be visible".

"Until the civil war is successfully resolved, the IMF is absolutely the wrong institution to take the lead in financing," he told AFP.

"In particular, given the conflict, continued IMF lead compromises further its rules requiring that borrowing country policies are sufficient to secure sustainability."

Moreover, the IMF is weighing more money for Ukraine just as it mulls a restructuring of the country's huge debt to commercial lenders, already equal to more than 73 per cent of gross domestic output.

Asked about the debt issue on Thursday, IMF spokesman William Murray would only say: "The mission is in Kiev and they will discuss this with the authorities among other things, full stop."

It is a complicated equation, according to Mitov. A debt restructuring, especially one that forces investors to write off some debt, would alleviate financial pressures on the country.

But it also "risks alienating foreign creditors for quite some time," meaning Ukraine would have limited access to debt markets, he noted.

The financing needs are Dantean. According to the Institute of International Finance, the country will need $50 billion from now through 2018, as it sinks into its worst recession since the Second World War.

And for the moment, the United States and Europe are skittish about pouring more money into Ukraine alongside the IMF.

Promoted
Listen to the latest songs, only on JioSaavn.com
Internally, the IMF should find it easy to gain member support for yet another bailout in the European region.

The United States is the main shareholder in the institution, and they do not want to see Russia benefit from Ukraine's collapse. But Moscow too should be a supporter, as it is one of Ukraine's top creditors, with $16 billion owed it by Kiev.