Ukraine Crisis: All You Need To Know About Russian Special Force Spetsnaz

Spetsnaz commandos have been used by Russia in big international events, like the Syrian crisis and to lead an attack on the Chechen rebels. 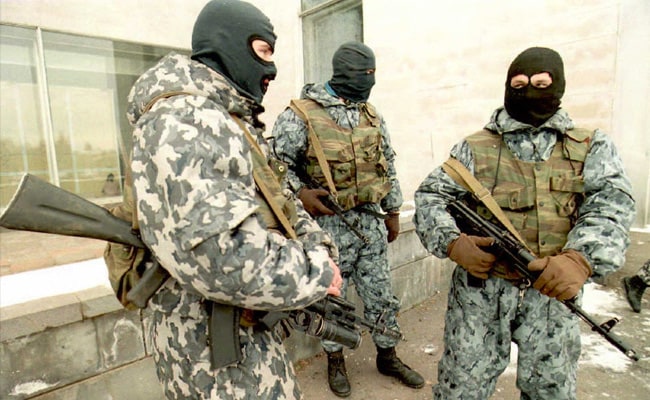 File Photo: Spetsnaz soldiers patrol the grounds around the airport in Beslan. (AFP)

Ukrainian forces are defending against an invasion on three sides by a Russian military that is bigger, better armed and steeped in recent combat experience from Syria's civil war. Missiles rained on Ukrainian cities, destroying air bases and other key buildings as columns of troops poured across its borders from Russia and Belarus.

Reports say that among the Russian military units which crossed the Ukrainian borders are the Spetsnaz, which according to the NATO, were sent to Belarus during the joint military drills. They have carried out missions during wartime as well as peace, in emergencies across the world.

What is the Spetsnaz force?

To understand the origin of the sophisticated special military unit, it's important to know about the Glavnoye Razvedyvatelnoye Upravlenie or GRU, Russia's military intelligence service.

The GRU outlasted the KGB when the Soviet Union collapsed in 1991 and many western powers fear that it is flourishing today. The GRU - which according to Encyclopedia Britannica now stands for the Main Intelligence Directorate - is has been blamed for the Salisbury nerve agent attack on 2018.

Apart from agents, this military intelligence unit also has its own commando unit called the Spetsnaz. Its mission is to conduct reconnaissance and sabotage.

The Spetsnaz were very active during the Soviet time, and even spearheaded the invasion in Afghanistan in 1979, according to the BBC. The commando unit was formed in 1949.

The word Spetsnaz translates as “special designation” and is applied to elite military unit in Russia.

According to the BBC, the commandos in the Spetsnaz special unit number between 1,500 and 2,000. The unit is controlled by the Federal Security Service.

They have been used by Russia in big international events, such as during the recent Syria crisis, and to lead an attack on the Chechen rebels two decades ago.

They were active during the Cold War too, as an airborne battlefield reconnaissance force, operating deep behind enemy lines.

After the collapse of the Soviet Union, the Spetsnaz soldiers were recruited for a range of security and counter-terrorist roles.

One of the Spetsnaz units, known as Vega, specialises in dealing with nuclear incidents. Another one called Fakel (or torch) is skilled in dealing with hostage situation.

Since it's an elite force in Russia, which has had a formal military intelligence service for more than 200 years, the selection process is gruelling.

The training to become a Spetsnaz soldier lasts for up to five years. The induction process itself is brutal and goes on for five months, according to information available on some Russia websites.

The reports say that these recruits are often handpicked from other military units, and are usually those who show “signs of toughness of character”.