Under the AUKUS alliance, the three nations have agreed to enhance the development of joint capabilities and technology sharing, foster deeper integration of security and defence-related science, technology, industrial bases and supply chains. 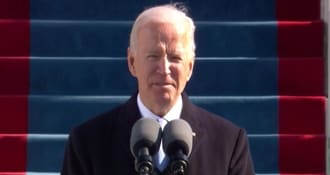 The US, Britain and Australia have announced a new trilateral security alliance for the Indo-Pacific to protect their shared interests and allow for greater sharing of defence capabilities, including help Australia acquire nuclear-powered submarines, amid China's growing influence over the strategically vital region.

The new alliance AUKUS, dubbed as "landmark", was launched virtually with a joint televised address on Wednesday. Under the AUKUS alliance, the three nations have agreed to enhance the development of joint capabilities and technology sharing, foster deeper integration of security and defence-related science, technology, industrial bases and supply chains.

Under the first major initiative of AUKUS, Australia would build a fleet of nuclear-powered submarines with the help of the US and the UK, a capability aimed at promoting stability in the Indo-Pacific region.

"The UK, Australia and US are natural allies - while we may be separated geographically, our interests and values are shared," said British Prime Minister Boris Johnson, who joined US President Joe Biden and Australian Prime Minister Scott Morrison from Downing Street for the virtual address before a joint statement was released.

"The AUKUS alliance will bring us closer than ever, creating a new defence partnership and driving jobs and prosperity. This partnership will become increasingly vital for defending our interests in the Indo-Pacific region and, by extension, protecting our people back at home," he said.

Johnson said the aim of the new partnership was working hand in glove and to preserve security and stability in the Indo-Pacific.

"We're opening a new chapter in our friendship. And the first task of this partnership will be to help Australia acquire a fleet of nuclear-powered submarines.

"Emphasising, of course, that the submarines in question will be powered by nuclear reactors not armed with nuclear weapons. And our work will be fully in line with our nonproliferation obligations," he said.

All three leaders insisted that the submarines would be nuclear-powered and the effort is geared towards ensuring peace in the Indo-Pacific region.

Over the next 18 months, the three countries will work together to seek to determine the best way forward to achieve this, he said.

Australia is not seeking to acquire nuclear weapons or establish a civil nuclear capability, Morrison asserted, adding that the US will continue to meet all its nuclear nonproliferation obligations.

Speaking from the East Room of the White House, US President Biden observed that the three countries will update and enhance their shared ability to take on the threats of the 21st century, just as they did in the 20th century, together.

Biden said AUKUS will bring together sailors, scientists, and industries to maintain and expand their edge and military capabilities and critical technologies such as cyber, artificial intelligence, quantum technologies, and undersea domains.

The agreement reflects the unique level of trust and cooperation between our three countries, who already share extensive intelligence through the Five Eyes alliance, Downing Street said.

The leaders said their new endeavour is aimed at helping sustain peace and stability in the Indo-Pacific region.

The initial scoping phase for the new alliance is expected to take 18 months. The UK said that as it has built and operated world-class nuclear-powered submarines for over 60 years, it will bring "deep expertise and experience" to the first project under AUKUS.

The UK and US, already leading members of NATO defence alliance, said the work done by AUKUS will support shared goals in new regions, promoting stability and protecting "our people against new and emerging threats".