The court said the UK government -- which in 2018 approved the Heathrow extension -- had failed to take into account its commitments to the Paris Agreement to limit climate warming. 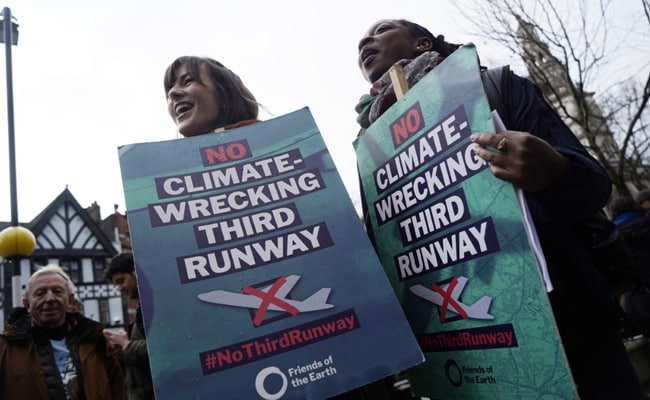 Campaigners against Heathrow expansion celebrate outside the Royal Courts of Justice in London. (AFP)

Britain's Court of Appeal on Thursday ruled in favour of green campaigners who oppose the building of a third runway at London's Heathrow airport, Europe's busiest.

The court said the UK government -- which in 2018 approved the Heathrow extension -- had failed to take into account its commitments to the Paris Agreement to limit climate warming.

The legal action against the approval was brought by various London councils, environmental groups including Greenpeace and Friends of the Earth, and London Mayor Sadiq Khan. They lost at an original hearing in May.

In a summary, judge Keith Lindblom said the Conservative government under then-prime minister Theresa May gave no explanation of how it took into account the 2015 Paris accord -- which seeks to cap climate warming to less than two degrees Celsius.

The judge added that the government did not oppose its declaration -- and had not sought permission to appeal to London's Supreme Court.

In 2015 while he was London mayor, British Prime Minister Boris Johnson promised to "lie down in front of... bulldozers and stop the construction" of a third runway, citing environmental as well as aesthetic concerns.

Boris Johnson may still have to make an official decision on scrapping the project, however, after Heathrow airport -- which is owned by a consortium led by Spanish construction giant Ferrovial -- declared it would appeal Thursday's ruling.

"We won! Today we blocked the Tory government plans to build a third runway at Heathrow Airport," the London mayor said.

"Today's judgement is a major victory for all Londoners who are passionate about tackling the climate emergency and cleaning up our air."

"Boris Johnson should now put Heathrow out of its misery and cancel the third runway once and for all. No ifs, no buts, no lies, no U-turns," John Sauven said.

Prior to the ruling, building of the third runway had been expected to start in 2022 and take four years.