The vote was taken following 11 days of protests organised by climate activists Extinction Rebellion that brought several London sites to a standstill. 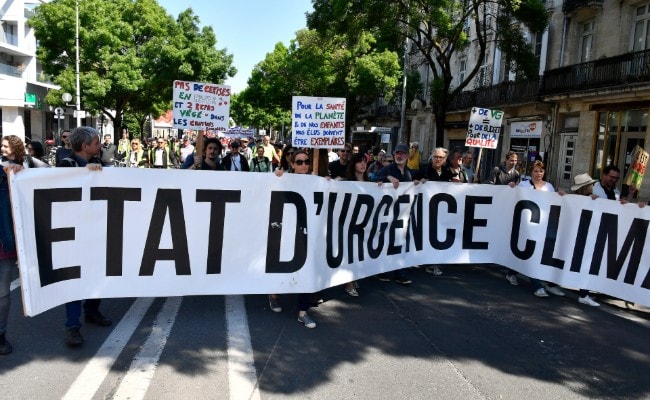 People carry a banner that reads, 'State of Climate emergency' in the French city of Bordeaux

Britain's opposition Labour Party on Wednesday called for "real action" after parliament became the first in the world to vote to declare a climate emergency.

"Thanks to pressure from the Labour Party, the UK just became the first country to declare an environment and #climateemergency," the party said on its Twitter page.

"Now it's time for real action to tackle climate change."

Party leader Jeremy Corbyn said he hoped the vote "will trigger a wave of action from parliaments and governments around the world".

He hopes the move will increase pressure on the government and is demanding that the country takes action to help avoid more than 1.5 degrees centigrade of warming, requiring global emissions to be cut by almost half of 2010 levels by 2030.

The vote was taken following 11 days of protests organised by climate activists Extinction Rebellion that brought several London sites to a standstill.

Extinction Rebellion called the vote a "first step in the government telling the truth about the climate and ecological emergency."

"Pressure on our politicians will now increase as nothing but decisive action will suffice," they added.

(Except for the headline, this story has not been edited by NDTV staff and is published from a syndicated feed.)
Comments
Labour PartyClimate emergency