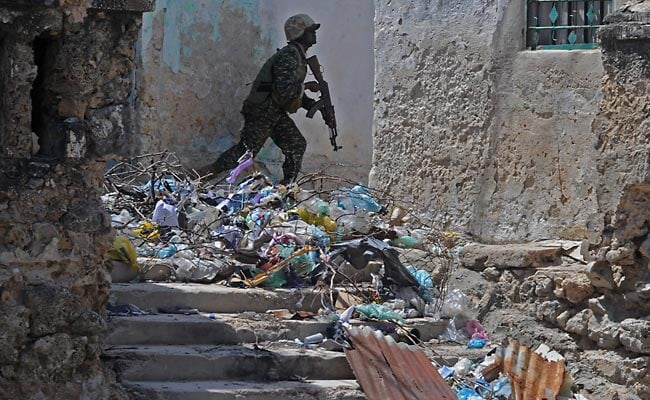 Ugandan soldier patrols a back street in the southern town of Merka. (AFP)

Kampala, Uganda: The Ugandan army said on Wednesday it had evacuated 38,000 civilians caught up in fighting in Juba, the capital of crisis-hit South Sudan.

Most of those taken across the border were Ugandans but "they were joined by hundreds of Kenyans, Rwandans among other nationalities who wanted to leave South Sudan for their safety," Ugandan army spokesman Paddy Ankunda told AFP.

Describing the evacuation process in recent days as successful, the army spokesman said "the total number of civilians evacuated from South Sudan by road under protection of the UPDF (Ugandan army) since the start of the operation has reached 38,000".

The evacuation operation began on Friday.

The Ugandan army joined the conflict in South Sudan soon after it began in December 2013, fighting on President Salva Kiir's side against a rebel force led by arch-rival Riek Machar, now the country's vice president. The combat troops only pulled out late last year.

The recent violence in the capital echoes the fighting that first triggered the civil war and marks a fresh blow to a deal reached last year to end the bitter conflict which began when Kiir accused Machar of plotting a coup.

Kiir is a member of the Dinka tribe, while Machar is a Nuer, and the dispute has split the country along ethnic lines and caused tens of thousands of deaths.

The Ugandan army's rescue operation involves a heavily protected convoy of 30 vehicles which have been ferrying people the 200 kilometres from Juba to the Ugandan border.

Once the evacuees safely reach Ugandan territory, helicopters take young children, the sick and  pregnant women to a hospital in Gulu, in the north of the country, said Ankunda.

These are people who fled Juba after deadly fighting broke out earlier this month between government forces and the rebels.