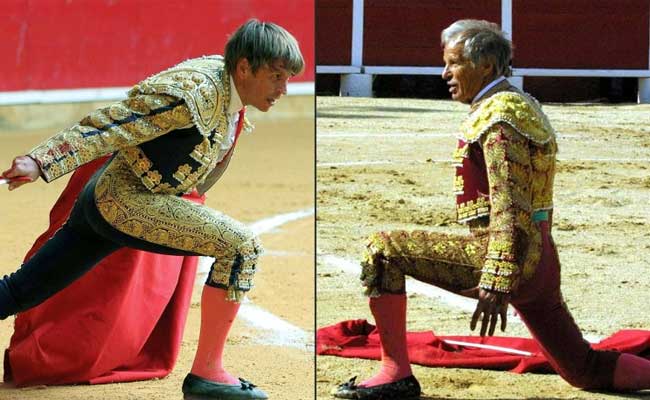 Cordova, Spain: Legendary Spanish bullfighter Manuel Benitez, "El Cordobes", is locked in a legal battle with another popular matador who openly uses the same nickname and has for years claimed to be his son.

The scandal broke in February when Manuel Diaz told "Hola!" magazine he had filed a paternity suit against his supposed father in the southern city of Cordoba after trying in vain to form a relationship with him.

"I thought that being a matador I would be able to reach him, but my father remains elusive," the 47-year-old told the celebrity magazine.

"The straw that broke the camel's back was the day when he was asked about me during a television interview. Benitez turned away from the camera as if I were the devil. My children asked me 'Why doesn't your father want to talk about you?'," he said.

Diaz says Benitez, 79, who revolutionised the conservative bullfighting world in the 1960s with his acrobatic style, had a brief affair with his mother when she worked as a maid in Madrid.

But when she became pregnant, Benitez did not want to have anything to do with the child, according to the younger "El Cordobes".

Diaz says he does not want to make any claims on Benitez's estate and just wants to claim a lineage that he is proud of.

Benitez, whose fame in the bullring lifted him out of poverty, has five children with his wife Martina Fraysse, whom he divorced earlier this year.

The two men bare a striking resemblance which Spain's eager gossip press like to highlight regularly.

To file a paternity suit, Diaz needed evidence to backup his claim so he turned to a detective who seized a napkin used by the senior matador at a bar to wipe his lips, Diaz's lawyer Fernando Osuna said.

Diaz said DNA analysis of the napkin indicated with 99.9 percent certainty that he is Benitez's son, and the paternity suit was accepted in December by a court, which will rule on the case on April 28.

Osuna said both bullfighters had separately taken DNA tests on Friday, and the results are due next week.

Benitez, whose fame transcended Spain at the height of his career in the 1960s, now avoids the media.

His rise from an illiterate youth who was caught by police stealing chickens to top matador was narrated in the 1967 best-selling book "Or I'll Dress You in Mourning: The Extraordinary Story of El Cordobes".

His good looks also helped him secure a number of film roles.

In the arena, Benitez adopted an unorthodox but spectacular style -- he would sometimes jump on the back of the bull -- which earned him criticism from experts but delighted the crowds.

"He arrived at bullfighting at a time when Spain was depressed, when the economy was doing badly," said Carlos Crivell, who covers bullfighting for daily newspaper El Mundo.

"He lifted spirits, not so much bullfighting fans but the people in general, because they saw in him a matador of humble origins, very poor, who became very important because he earned a lot of money."

Benitez was the best paid matador of his era, according to Crivell.

He added that Benitez was the first matador to earn over a million pesetas for each bullfight at Seville's prestigious arena -- a small fortune in even the inflation-prone former Spanish currency.

"Everyone who understands bullfighting recognises that he was a revolutionary, who dominated the arena with his popularity as well as his bullfighting skills, especially his ability to fight bulls using his left hand," Crivell said.

The younger El Cordobes also has an exciting style and his own public following, but "his popularity is based more on the gossip press than his bullfighting qualities," he added.

(This story has not been edited by NDTV staff and is auto-generated from a syndicated feed.)
Comments
Bullfighters fightMatador paternity suit