The highest administrative court revoked the sixth-century monument's status as a museum on July 10 and Erdogan then ordered the building to reopen for Muslim worship, upsetting the Christian community and further straining ties with Greece. 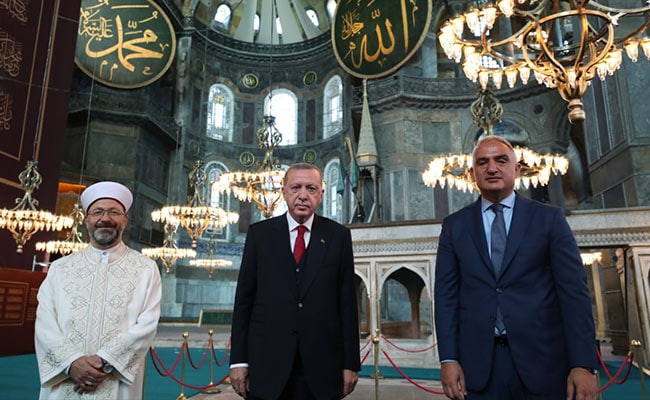 Turkish President recited a verse from the Koran before the call to prayer was heard.

Turkish President Recep Tayyip Erdogan on Friday led the first Muslim prayers attended by thousands in Hagia Sophia since the controversial reconversion of the iconic Istanbul cathedral into a mosque.

The highest administrative court revoked the sixth-century monument's status as a museum on July 10 and Erdogan then ordered the building to reopen for Muslim worship, upsetting the Christian community and further straining ties with Greece.

Wearing an Islamic skullcap, Erdogan recited a verse from the Koran before the call to prayer was heard from the four minarets of Hagia Sophia, AFP correspondents said.

Then the head of the state religious affairs directorate, Ali Erbas, delivered the sermon, which was broadcast live on Turkish news channels.

There was such a large flow of people keen to take part in the prayer, Istanbul Governor Ali Yerlikaya said on Friday morning the spaces in and around Hagia Sophia were swiftly filled.

Aynur Saatci, 49, described it as a "historic moment", telling AFP she was on holiday in Erzurum, eastern Turkey, but came back for the event.

"I immediately cut my holiday short and returned to Istanbul as soon as I knew we could pray in Hagia Sophia," Saatci said. "I'm deeply moved."

Experts say Erdogan is trying to invigorate his religious and nationalist base and many Muslims attending the prayer saw it as a landmark event.

"This is the moment when Turkey breaks its chains. Now it can do whatever it wants, without having to submit to the West," Selahattin Aydas, from Germany, said.

"We've been waiting for this for years. I'm very happy. There might be sanctions against Turkey because of this, or the number or tourists may fall but that doesn't change anything for me," Hatip, who manages a souvenir shop near Hagia Sophia, said.

In Greece, churches were in "mourning" with their bells around the country expected to peal at midday to protest the reconversion.

Religious and nationalist groups will hold protests in Athens and Thessaloniki later on Friday.