Turkey Kurdish Leader 'Against Both Coup And Recep Tayyip Erdogan' 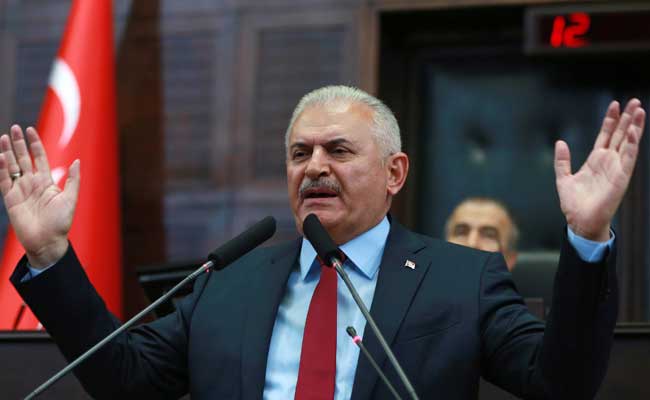 Ankara: Turkey's main pro-Kurdish party strongly opposes the failed coup against President Recep Tayyip Erdogan but will keep up its opposition to the "oppression" of the Turkish strongman, its leader says.

Selahattin Demirtas, the co-chairman of the Peoples' Democratic Party (HDP), told AFP in an interview there was no contradiction between strongly opposing last week's putsch as well as Erdogan's rule.

The HDP is highly suspicious that a state of emergency declared by the authorities could be used for a wider crackdown beyond the coup plotters, he said.

Demirtas added that the chances of resuming the peace process to end the over three-decade insurgency of the Kurdistan Workers' Party (PKK) are weak so long as its jailed leader Abdullah Ocalan is sidelined.

"In Turkey, we never have never seen a coup bring stability and democracy. All coups are bad and damaging for the country," Demirtas said, speaking at HDP headquarters in Ankara.

"Turkey was already afflicted by Erdogan's oppression and the putsch would only have made things worse."

Demirtas and the HDP turned into a major headache for Erdogan and the ruling Justice and Development Party (AKP), with his natural charisma helping scoop over 13 percent of the vote for the HDP in June 2015 legislative polls.

In a snap re-run of the elections in November the same year, the HDP's share of the vote fell to under 11 percent, with Erdogan targeting the party and accusing it of being the political wing of the PKK.

"In the face of the coup, we supported democracy," said Demirtas.
"But we have not supported Erdogan nor their (the AKP's) policies. In reality, we think that it is the errors made by Erdogan that led to the realisation of thiscoup."

'No confidence in AKP'

The coup came almost a year to the day after the breakdown of a truce declared by the PKK that had held for two and a half years. There has been no let-up in the fighting since.

The violence which has seen almost 500 members of the Turkish security forces killed in a year brought to an end a peace process that had raised hopes for a final deal to end the conflict.

The PKK wants greater autonomy and rights for Turkey's estimated 20 million Kurds. Erdogan has described the peace process as now being in the "freezer".

The PKK is outlawed as a terror group by Ankara, the EU and United States. But Turkish officials have made no link between the PKK and the coup, which Erdogan blames on the US-based preacher Fethullah Gulen.

Demirtas said time would tell if the state of emergency declared by Erdoganwould be used for an even wider crackdown against all opponents, with tens of thousands of people already sacked or detained.

The HDP which draws its support from many, but not all, of Turkey's estimated 20 million Kurds as well as liberal Turks voted against the state of emergency when it was put to parliament.

"The government said that the state of emergency will only be aimed at the coupplotters. But we are only going to be able to check that in a few days," said Demirtas.

"If the authorities start to ban speeches, demonstrations or opposition media under cover of any operation against the putschists... we will understand that the use of the state of emergency is being abused."

He added: "We voted against the state of emergency because we have no confidence in the AKP on this subject."

Demirtas, who has faced an uphill struggle in the last months to distance the HDP from the PKK in voters' perceptions, was downbeat about the prospect of the peace process resuming after the coup.

He said the key lay on the island of Imrali off Istanbul, where the PKK's leader is serving a life sentence and cut off from communication from the outside world since the peace process ruptured.

"But I don't think we should think that a government will return to the peace process when it does not authorise even that.

"The peace process has to be resumed. And so the fighting ends, Abdullah Ocalan has to be put back into the circuit."