President Donald Trump ushered in a new era in US-Saudi Arabian relations by signing a joint 'strategic vision' that includes $110 billion in American arms sales and other new investments that would bring in new jobs. 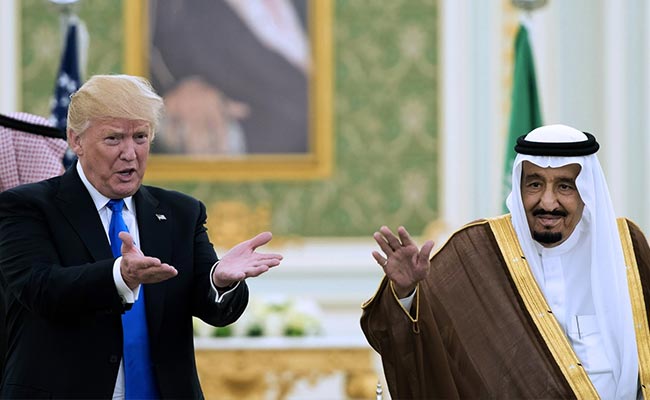 Riyadh: President Donald Trump made a splashy debut on the world stage here Saturday, ushering in a new era in U.S.-Saudi Arabian relations by signing a joint "strategic vision" that includes $110 billion in American arms sales and other new investments that the administration said would bring hundreds of thousands of jobs.

"It was a great day," Trump said. He cited "tremendous investments in the United States . . . and jobs, jobs, jobs."

While initial details were scant, the agreements signed included a U.S. letter of intent to "support Saudi Arabia's defense needs" with sales of a number of items - naval ships, tanks and other vehicles - that were the subject of agreements under earlier administrations, as well as some new items that had never passed the discussion stage, such as sophisticated THAAD missile defense systems.

Other items are intended to modernize Saudi Arabia's cyberdefense and airborne intelligence-gathering, and secure its borders.

Secretary of State Rex Tillerson, in a news conference with his Saudi counterpart, described common views on counterterrorism, the threat from Iran and regional security. He outlined "like-minded" goals in the security and economic spheres and said, "We're very proud of this relationship that we are embarking on with the kingdom."

What emerged as a veritable love fest between the two governments was a marked contrast to years of growing estrangement under President Barack Obama.

"This is the beginning of a turning point in the relationship between the United States and the Arab and Islamic world," Saudi Foreign Minister Adel al-Jubeir proclaimed alongside Tillerson.

Trump's visit, he said, "begins to change the conversation" with the Islamic world "from one of enmity to one of partnership."

In addition to the security agreements, Jubeir said, U.S. business leaders here at an economic forum designed to coincide with Trump's visit signed deals potentially worth more than $200 billion over the next 10 years.

Executives from a number of major U.S. companies unveiled investment partnerships with the Saudis, including Blackstone, a private-equity giant that announced a $40 billion infrastructure fund. Stephen A. Schwarzman, Blackstone's chairman and chief executive, is close to Trump and leads the White House's economic advisory council of CEOs.

Jubeir also praised ExxonMobil, the energy behemoth that Tillerson ran until retiring to join the administration, as "the largest investor" in Saudi Arabia.

Trump was received like visiting royalty from the moment Air Force One touched down in Riyadh on Saturday morning, after an all-night flight from Washington, where he hoped to leave behind the growing Russia scandal threatening his presidency.

In a series of official arrival ceremonies - at the airport and the Royal Court palace - Trump, his wife, Melania, and an entourage including virtually his entire senior White House staff and some of his Cabinet, were serenaded by military bands, treated to a flyover of Saudi jets, feted in opulent palaces and given the undivided attention of King Salman, ruler of this ultraconservative Muslim nation.

As Trump arrived at Murabba Palace for a royal dinner, hundreds of Saudi men in long, white robes danced the Ardha, a traditional sword dance that is performed on Saudi National Day and in honor of special guests.

American country star Toby Keith performed at a men's-only concert in Riyadh on Saturday night, coinciding with Trump's visit. As Trump and Salman were driven in a golf cart around the palace after dinner, the president trained his eyes on a jumbo screen playing the live concert.

The ebullient welcome reflected a kingdom eager to rekindle its relationship with the United States, and to use the visit to declare and solidify its own leadership role in the Muslim world.

Jubeir, in the news conference with Tillerson, heaped praise on Trump, saying that the foreign policy novice had the "vision," "strength" and "decisiveness," in the estimation of the Saudi leadership, to bring peace between Israelis and Palestinians. The minister went on to borrow one of Trump's favorite campaign slogans, saying that a new relationship between the United States and the Arab world could "drain the swamps from which extremism and terrorism emanates."

In their private talks, Trump and Salman discussed their shared view of the threat from Iran. Asked about Friday's reelection of Iranian President Hassan Rouhani, Tillerson said he hoped Rouhani would use his term to "begin dismantling Iran's network of terror," stop destabilizing the Middle East, end ballistic missile testing and restore basic rights.

However, there was public silence from the U.S. delegation on the issue of human rights in Saudi Arabia, which has imprisoned peaceful critics of the government and has sharply restricted the rights of women. Ahead of the visit, Trump's advisers said the president did not intend to "lecture" his hosts.

Obama, who sold about $115 billion in U.S. weapons to Saudi Arabia during his eight years as president, had slowed military cooperation with the kingdom in large part because of what it considered Saudi Arabia's indiscriminate bombing of civilians in Yemen. The Trump deal puts those agreements back on track and expands them.

Beyond the closed-door meetings, this desert capital was decked out for a celebration. As Riyadh baked in triple-digit heat under a pall of dust, American and Saudi flags flew from light poles. The facade of the Ritz Carlton, the palace-like hotel where Trump is staying, was illuminated with massive photographs of the two leaders and the red, white, blue and green of the two nations' flags.

Salman, 81, who ascended to the Saudi throne in early 2015, was brought in a golf cart to the airport red carpet laid out for Trump's arrival.

"I'm very happy to see you," Salman told Trump, who responded that it was a "great honor" to be visiting the kingdom.

Trump and the first lady - who had her hair uncovered and wore black long sleeves and flared pants, cinched with a wide, metallic gold belt - were presented bouquets of flowers by three traditionally dressed little girls.

Salman's presence at the airport ceremony was a sign of the importance of Trump's visit to the Saudis. Chatting through an interpreter, the men then walked into the VIP reception terminal at King Khalid International Airport for a cup of coffee. Salman rode with Trump in the president's armored Cadillac for the drive into the city.

The only U.S. president to make Saudi Arabia his first foreign visit, Trump was presented with the highest honor for a foreign dignitary, the collar of Abdulaziz al-Saud, named for the kingdom's founder, which Salman hung on a thick gold chain around Trump's neck.

In an ornate reception hall at the Royal Court, members of the U.S. delegation lined up to shake hands with Salman, then took a seat along the periphery of the grand room aside a member of the Saudi delegation.

On the dais with Trump were the first lady, daughter Ivanka and Tillerson. Ross, Priebus, Bannon, and Trump adviser and son-in-law Jared Kushner also were there.

Lunch with the king followed. Spirits were high, with Kushner greeting national security adviser H.R. McMaster with a high-five as they then entered the room for a closed-door meeting.

The official delegations discussed issues including oil, Iran and Syria. Saudi Arabia is part of the U.S.-led coalition against the Islamic State, but relations were strained with Obama over his failure to push for the ouster of Syrian President Bashar al-Assad with strong support for rebels.

During his campaign, Trump indicated that he was uninterested in U.S. involvement in Syria's civil war. But as president, he has spoken out against Assad and last month launched a cruise missile attack against a Syrian government air base.

As they chatted following the award ceremony, Salman was overheard telling Trump that "Syria, too, used to be one of the most advanced countries. We used to get our professors from Syria. They served our kingdom. Unfortunately, they, too, brought destruction to their own country. You could destroy a country in mere seconds, but it takes a lot of effort."

On Sunday, Trump will meet with the heads of the six Persian Gulf monarchies of the Gulf Cooperation Council, and an Arab Islamic American Summit of at least 40 nations, primarily from the Middle East, Africa and Asia.

The highlight of Trump's stop in Riyadh is expected to be a speech on Islam that he will deliver Sunday to the larger summit meeting. Though his campaign was marked by harsh anti-Muslim rhetoric, Trump is planning to preach religious tolerance here, inviting the Arab world to join the United States in combating terrorism and evil in the region.

Trump, according to an advance portion of the remarks he will deliver, will describe the fight against radicalism as "a battle between good and evil."

Trump also planned to participate in the inauguration of a new Saudi center to fight radicalism and promote moderation, as well as take part in a Twitter forum with young people.

On Sunday, Melania Trump will make some cultural visits, while Ivanka Trump plans to hold a roundtable session on "women's economic empowerment." The role of women in Saudi society, where they are denied basic rights, is a source of controversy for the monarchy.

On Monday, Trump will travel to Jerusalem for meetings with Israeli officials, as well as a visit with Palestinian President Mahmoud Abbas in Bethlehem, and then to Rome, where he will have a private audience with Pope Francis.

Trump then visits Brussels for a meeting with NATO leaders, including a bilateral session with newly elected French President Emmanuel Macron, and finally to the Italian island of Sicily, where he will attend a Group of Seven summit of the United States' closest economic allies.

The Washington Post's Ashley Parker in Washington contributed to this report.


Video: Trump lauded the "tremendous day" and "tremendous investments into the United States" from Saudi Arabia. (The Washington Post)


Video: President Trump grinned as he held a sword and swayed along with traditional dancers at Murabba Palace in Saudi Arabia on May 20. (The Washington Post)