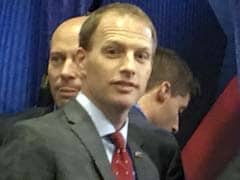 INDIANAPOLIS: A key aide to Donald Trump's vice presidential nominee, Gov. Mike Pence, continues to earn $23,000 a month as Indiana's sole Washington lobbyist even as he has taken a paid position with the Republican presidential campaign and regularly travels with Pence to political rallies across the country during working hours.

The dual, simultaneous employment of Joshua Pitcock is unusual. Legal and ethics experts contacted by The Associated Press said the government lobbyist should be subject to the same ethics rules as rank-and-file state employees, which generally prohibit such double-dipping. A separate prohibition against moonlighting bans Indiana state employees from accepting outside employment or undertaking activities that are not compatible with their public duties, would impair their independence or judgment, or pose a likely conflict of interest.

The governor's office said Pitcock is exempt from most such rules because the Pence administration treats Pitcock as an independent contractor. It considers his contract for "professional services" different than contracts for "personal" services, which treat contractors as employees.

"The arrangement that the state of Indiana has with a firm in Washington, D.C., has been a great, great success for our state," he told television station KDVR in Denver in an interview. "That individual and his team have worked very effectively advocating Indiana's interest. But It's an individual firm, an individual contractor."

Pence said there was no conflict of interest. "He's not a state employee and so he's entitled to have other clients and I'm grateful to have his support and assistance for the state of Indiana," he said in the interview.

Pitcock continues to collect monthly lobbying fees - a total of nearly $1 million since Pence won election in 2012 and took office in 2013. Since August, after Pitcock also began working as Pence's policy director for the election, Trump's campaign has paid Pitcock's firm $32,374 for event consulting, according to the latest financial records from the Federal Election Commission. Pitcock told AP that he refunded to Trump's campaign $15,612, which he described as an overpayment caused by an accounting error.

An employment law professor at Indiana University's Maurer School of Law, Kenneth Dau-Schmidt, said the distinction Pence's office was making was "novel under the law" but "a pretty bad argument."

"It is not in the statute, no one has raised it before and there is no existing case law that would recommend that a court accept that distinction," said Dau-Schmidt, who has contributed to Democrats, including $300 to Barack Obama in 2007. "Professional services are personal services and there is no logical reason under the statute to distinguish between the two."

A former Democratic state lawmaker and professor at Indiana University's McKinney School of Law, David Orentlicher, said Indiana's ethics law was clumsily worded but said Pitcock should be included in its restrictions.

"I think you have an obligation to get an advisory opinion," said Orentlicher, who ran unsuccessfully for Congress as a Democrat earlier this year. "If we're going to grant you the ambiguity, the way to resolve that is to get clearance, not just go forward in the face of that kind of uncertainty."

Pitcock said he was working diligently for both his employers and there was no conflict or violation of state employment rules.

"My firm has a contract with the state of Indiana to perform certain duties related to federal affairs, including lobbying," Pitcock said in a statement. "Those duties have been and continue to be performed fully and completely. I am not a state employee. My firm's contract with the state does not preclude working with other clients. The Donald J. Trump for President campaign engaged my firm for services related to federal policy for the vice presidential nominee. There is no conflict in performing services for both clients."

Pence's spokesman, Matthew Lloyd, said the state was unconcerned about Pitcock's double employment. Pitcock's lobbying contract does not specify any minimum number of hours or days that Pitcock must spend working on state business, so it would be impossible to say he is working outside the scope of his official state duties while traveling with Pence on the campaign trail, Pence administration officials said.

As Indiana's lobbyist, Pitcock filed monthly summaries back to Indianapolis about congressional activity and current events in Washington and tracked the activities of Indiana's congressional delegation and interactions between state officials and U.S. executive agencies, according to an AP review of his emails obtained under Indiana's open records act. On occasion, he noted details about Hillary Clinton's latest entanglements over the use of her private email server. The director of Indiana's child-welfare agency asked Pitcock's help organizing tours for her relatives of the White House and Supreme Court.

The AP began examining Pitcock's employment as Indiana's lobbyist after Pence was named Trump's running mate and the news organization asked for copies of Pitcock's emails with top-level Pence staffers. State offices initially said it would take months before they could provide any records, but after AP objected as Election Day approached, they produced some documents. Lloyd, the Pence spokesman, previously told the AP that its request to examine Pitcock's emails was "bulls-," saying Pitcock was a dedicated and tireless worker who served the state of Indiana well.

Indiana's administrative regulation prohibits any state officer, employee or special state appointee from working or directing others to work outside the performance of their official duties during working hours except as permitted by policy or regulation.

Under Indiana law, state employees include anyone who contracted with the state for personal services, but Pitcock's professional services contract specifically said he "shall not be considered a state employee or special state appointee for any purpose."

The Pence administration said Pitcock's lobbying contract was reviewed by the state's contracting agency and the office of Indiana's attorney general.

Promoted
Listen to the latest songs, only on JioSaavn.com
Members of Indiana's congressional delegation, including the office of Republican Sen. Dan Coats, said Pitcock was an effective lobbyist.