Trump Organization Gets Approval For Expansion At Ireland Golf Course

The move toward home-building and private parties comes as the company has suffered losses at its three European golf courses for several years. 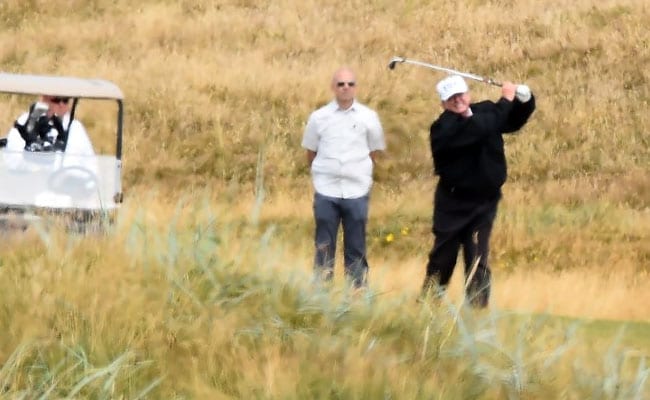 In Doonbeg and surrounding rural towns, many residents support the Trump golf course.

A local council in southwestern Ireland on Thursday approved a Trump Organization plan to build 53 houses and a new ballroom at its seaside golf course, part of the company's efforts to reverse financial losses at its European resorts by moving into home-building and hosting more private events.

The approval by the Clare County Council to build out the farmland around the Trump International Golf Links and Hotel Doonbeg is the second such victory in recent weeks for President Trump's family business.

The move toward home-building and private parties comes as the company has suffered losses at its three European golf courses for several years.

"We very much welcome this potential investment in Clare by the Trump Organization, and we see it as a validation of a very important and very successful tourism product," said Liam Conneally, director of economic development and planning with Clare County Council.

The decision could potentially be appealed, Conneally said.

"It is a wonderful day for Doonbeg and the entire West Coast of Ireland!" Eric Trump, one of the president's sons, said in a statement. Eric Trump and his brother Donald Trump Jr. have taken over day-to-day operations of the Trump Organization while their father is in the White House.

In Doonbeg and the surrounding rural towns, many residents support the Trump golf course and its expansion plans. The course, along with its hotel and restaurant, represent well-paying jobs in an area with few economic opportunities beyond farming. Even those who don't support Trump politically often want the property to succeed.

"It's easy to see what the benefit is," said John Flanagan, a farmer who lives near the Doonbeg course. "There's 300 people with families working there."

Trump bought the Doonbeg course out of foreclosure in 2014, paying $11.9 million. The course has lost more than $1 million every year from 2014 to 2017, according to the most recent Irish corporate records available.

In 2018, the course's revenue rose about 2 percent, from $14.2 million to $14.5 million, according to Trump's latest U.S. financial disclosures. Documents showing whether the course made a profit or a loss in 2018 are not yet available.

At the Doonbeg course, which is perched on sand dunes overlooking the Atlantic Ocean, the biggest threats might not be financial. Over the years, seawater has eroded the dunes and risks washing away chunks of fairway. The Trump Organization has applied to build a rock barrier below the dunes to prevent further erosion, and that application is in court proceedings and awaiting a national planning board decision. Some environmentalists have opposed the barrier.

At Doonbeg, the Trump Organization plans to build the 53 houses for short-term visits by tourists, as well as a ballroom and a restaurant, among other facilities.

Council members said no local residents lodged formal opposition to the plan. Theresa and Tony O'Dea, a couple living near the course who ultimately supported the proposal, wrote to the planning department to say they "have endured distress and many sleepless nights" because of loud music from weddings and parties as well as regular helicopter flights that pass "extremely low over our house and farmland."

Other residents said that anything to help the company turn a profit would be welcome.

"What is being proposed is no way interfering with anything and just adding to it," said Liam Ryan, a local business owner who also supports Trump's sea wall plan.

The visit was criticized by House Democrats, and the House Oversight Committee opened a probe into whether Trump improperly benefited from the trip.

Trump, who has also visited Doonbeg this year, said he had nothing to do with Pence's decision to stay at his hotel. Pence said he wanted to visit his distant relatives who live in Doonbeg.

(Except for the headline, this story has not been edited by NDTV staff and is published from a syndicated feed.)
Comments
Trump OrganizationIrelandTrump golf course