French President Emmanuel Macron and Prime Minister Narendra Modi were among those seen talking with Mohammed amid international condemnation of his suspected role in Khashoggi's killing inside the Saudi Consulate in Istanbul on Oct. 2. 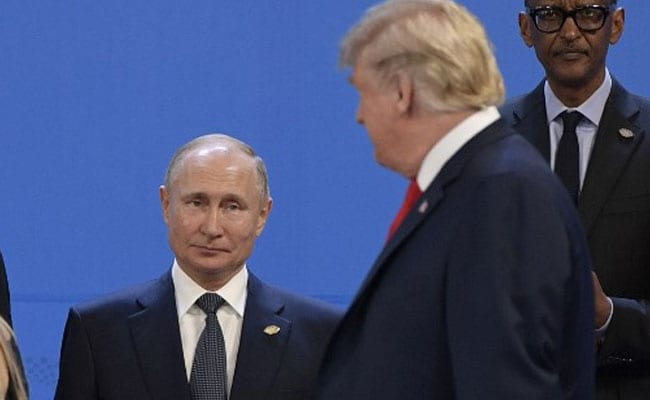 Donald Trump looks at Vladimir Putin as they take place for a family photo at G20 Summit.

President Donald Trump kept his distance from Vladimir Putin at a global summit here Friday that was clouded by an escalating Russia investigation in Washington and sniping with the Kremlin over why Trump canceled a planned meeting with the Russian president.

As leaders gathered for the opening session of the Group of 20 summit, Trump appeared cool toward some of his counterparts and was not seen acknowledging Putin, the autocrat whose interference in the 2016 presidential election is the subject of the Justice Department's far-reaching special counsel investigation.

Trump began the day on a triumphant note, ceremonially signing a hard-fought trade agreement with Canada and Mexico. But the summit's themes of global financial stability, dialogue and sustainability were swamped by intrigue surrounding Trump's interactions with Putin and everyone else's with Saudi Crown Prince Mohammed bin Salman, who has been identified by U.S. intelligence as the almost certain hand behind the brutal murder of journalist Jamal Khashoggi in October.

Trump sounded an upbeat note about the other main theme of the two-day gathering - the trade fight between the United States and China.

The president said he sees "some good signs" ahead of a high-stakes dinner meeting with Chinese President Xi Jinping, which is set for Saturday. "We've already spoken, and we're working very hard," he said. "If we can make a deal, that would be good."

Trump was one of the last leaders to enter the summit site for a group photo and walked past Putin and Mohammed without stopping to chat or shake hands. Trump, who has long shown an affinity for autocrats, had drawn criticism ahead of the summit for agreeing to meet Putin and for standing by Mohammed's denials of involvement in Khashoggi's killing.

Trump "exchanged pleasantries" with Mohammed on the sidelines of the summit, in the White House characterization. Trump insisted to reporters, "We had no discussion. We might, but we had none."

Putin, however, had a friendly exchange with Mohammed, high-fiving and laughing with the kingdom's de facto leader.

French President Emmanuel Macron and Prime Minister Narendra Modi were among those seen talking with Mohammed amid international condemnation of his suspected role in Khashoggi's killing inside the Saudi Consulate in Istanbul on Oct. 2.

Trump appeared to speak amicably with Macron, who just three weeks ago delivered a forceful rebuke of Trump's nationalism at a ceremony in France with the U.S. president present. Meanwhile, Japanese Prime Minister Shinzo Abe tried to stroke Trump's ego, even if bending the truth.

"I would like to congratulate you on your historic victory in the midterm elections in the United States," Abe told Trump at the start of their bilateral meeting. Abe apparently was alluding to Republican gains in the Senate but ignoring the fact that Democrats seized control of the House in a national rebuke of the president.

But Trump appeared to snub South Korean President Moon Jae-in, whose brief meeting with Trump took place away from cameras. The session was downgraded from a larger, more formal meeting. White House press secretary Sarah Sanders said the two leaders discussed North Korea, but her summary made no mention of an apparent stall in progress toward nuclear weapons negotiations.

Thursday's admission in court by former Trump attorney Michael Cohen that he lied to Congress about Trump's real estate ventures in Russia cast a pall over the Buenos Aires gathering.

Trump scrapped a planned sit-down with Putin, which was to have been a centerpiece of his visit to Argentina, citing Russia's aggression in Ukraine. Last weekend, a Russian vessel rammed a Ukrainian naval tugboat in a confrontation in which Ukrainian vessels were fired on off the coast of Crimea. Russia seized three Ukrainian vessels and 23 sailors.

"Is the Kiev-orchestrated Kerch provocation the true reason for canceling the meeting?" Russian Foreign Ministry spokeswoman Maria Zakharova said Friday in Moscow, referring to the Kerch Strait, where the clash occurred. "This is the explanation we hear in public, which we have taken note of. But I think one must look for answers in the domestic political situation in the United States."

"I doubt that this move will be conducive to the resolution of a whole host of important international problems. But love can't be forced, of course," Lavrov said in an interview with Russian state TV, according to the Interfax news agency.

"The Russian Witch Hunt Hoax, which is hopefully now nearing an end, is doing very well," Sanders said in a statement. "Unfortunately, it probably does undermine our relationship with Russia. However, the reason for our canceled meeting is Ukraine. Hopefully, that will be resolved soon so that productive conversations can begin."

And Trump later said Russia's aggression against Ukraine was "the sole reason" for canceling the meeting.

"We are not happy about it," Trump told reporters. "Hopefully they'll be able to settle that soon, and we look forward to meeting with President Putin. But on the basis of what took place with respect to the ships and the sailors, that is the sole reason."

Sanders said that, contrary to some reports in Russia, there are no plans for even an informal pull-aside meeting between Trump and Putin. However, the two presidents are expected to cross paths frequently, including perhaps at a cultural event and dinner for leaders Friday evening at the Argentine capital's fabled Teatro Colón.

Trump's schedule here - packed to bursting as outlined by aides earlier in the week - has grown lighter with the cancellation of the meeting with Putin. He also limited the planned session with Moon and with Turkish President Recep Tayyip Erdogan to brief chats on the margins of the gathering.

Trump rescheduled a sit-down with German Chancellor Angela Merkel for Saturday after the long-serving European leader's arrival in Argentina was delayed because of a problem with her government aircraft. Merkel instead flew to Buenos Aires aboard a commercial flight from Spain and missed the start of the summit.

Trump began his day on little sleep Friday, having tweeted after midnight local time about the G-20 and again a little more than six hours later with complaints about special counsel Robert Mueller III's investigation into Russian involvement in the 2016 presidential election.

But he seemed cheerful as he greeted Argentine President Mauricio Macri, whom he called an old friend, and ad-libbed a fond remembrance of his days as a Manhattan real estate developer.

"I've been friends with Mauricio for a long time," he said. "I actually did business with his family, with his father. Great father, friend of mine."

Trump said the elder Macri had been involved with Trump's purchase of the West Side Yard, a large chunk of developable land along the Hudson River in New York. Trump bought the former railroad property in 1985 for $115 million and planned to build a $4.5 billion complex called Television City. It never happened, and Trump defaulted on about $1 billion in loans in 1994. He sold a majority stake in the property and later took a profit when it was resold.

"It was a great job, successful job, very big job. One of the largest jobs in Manhattan," Trump mused Friday. "That was in my civilian days. And so I always had fond memories. Little did I know that his son would become El Presidente," Trump said. "And little did he know that I was going to become president."

But the bonhomie was interrupted later in the day when the Argentine government expressed exasperation with the White House's characterization of the Trump-Macri meeting. Sanders said in a statement that the two leaders had agreed on a "shared commitment to face regional challenges" including "predatory Chinese economic activity."

"That is not the position of the Argentine government, and there was no agreement on that statement," said a senior Argentine official, who spoke on the condition of anonymity because of the sensitivity of the issue. "Those are the words of the U.S. government. We have a great relationship with the Chinese, and we want to build on it."

"I don't know where this came from," the official continued.

Also Friday, Trump was in the audience as Mexican President Enrique Peña Nieto bestowed the Mexican Order of the Aztec Eagle, his country's highest award, on Trump's son-in-law and adviser Jared Kushner. Kushner was heavily involved in negotiations for a revamped North American Free Trade Agreement (NAFTA). Kushner thanked the Mexican leader, whose last day in office is Friday.

In contrast with Trump, who arrived in Buenos Aires only hours before the first summit meetings began, Macron was emerging as the darling of the Argentines. He arrived a day and half early and made a broad run through a city often dubbed the "Paris of South America." He dined at a traditional Argentine steak house and visited the cultural institute of the renowned Argentine author Jorge Luis Borges. He took his morning coffee at El Ateneo Grand Splendid, a theater turned book store and cafe that is heralded as among the most glamorous in the world.

Crowds formed outside the bookstore and cheered Macron, leading the local newspaper Clarín to declare Macron "a rock star."

It was a visit that was organized very confidentially," the bookstore's manager, Andrea Stefanoni, told Clarín. "It was organized days ago and was very beautiful because he is a person who feels very much tied to literature."

Saudi Arabia's crown prince found a different reception here. His problems followed him all the way to the Southern Cone of South America. On Monday, Human Rights Watch filed a complaint with Argentine prosecutors asking them to examine Mohammed's alleged responsibility for the torture of Saudi citizens and for human rights violations in Yemen.

Universal jurisdiction applies in Argentina, allowing authorities here to investigate crimes alleged to have been committed abroad by a national of any country. And by Wednesday, a federal prosecutor - Ramiro González - had begun making inquiries and forwarded the case to an investigating judge.

In the meantime, Mohammed, according to Human Rights Watch and local media reports, skipped plans to stay with his 400-person delegation at the luxurious Four Seasons Hotel in Buenos Aires. Instead, he mostly sheltered in the fortified Saudi Embassy here.

Argentine officials say his diplomatic immunity, plus the length of time required for any investigation, all but rule out any immediate action against him during the summit. But his apparent caution suggested possible concern, and that his future travel plans could be marred by similar legal maneuvers.