Since losing a major submarine deal with Australia, France has sought solace in leading Asian nations for deeper strategic ties in the Pacific region. 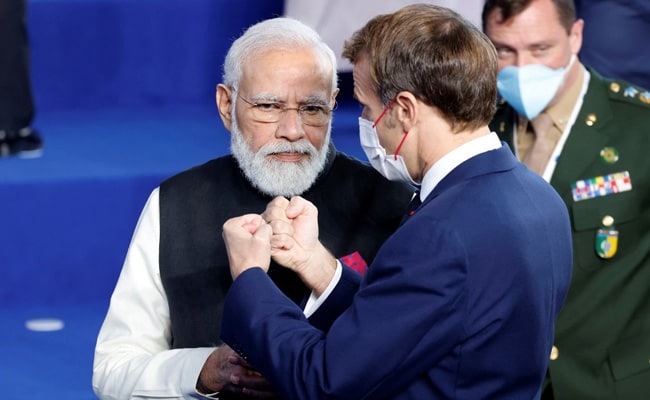 Emmanuel Macron on Saturday sought to enhance ties with India and Indonesia, France's presidency said, after Paris was locked out of a defence pact between the US, UK and Australia.

Since losing a major submarine deal with Canberra, which joined an AUKUS alliance to better counter China, France has sought solace in leading Asian nations for deeper strategic ties in the Pacific region.

On the sidelines of the G20 summit in Rome, President Macron first met his Indonesian counterpart Joko Widodo followed by Prime Minister Narendra Modi, focussing on the growing economic clout of the region and the rivalry between the United States and China.

"There was a common willingness to go further with the Indo-Pacific strategy," the French side said after talks with Modi. A follow-up meeting would take place next week to flesh out a joint agenda.

France and India, which first defined an Indo-Pacific strategy in 2018, found "a great convergence ... on the guiding principles of our actions in the Indo-Pacific: trust, independence and unity", the presidency said.

Macron also met South Korean President Moon Jae-in in Rome and they "agreed to work together to make the Indo-Pacific an area of stability and prosperity".

France considers itself a power in the Pacific thanks to overseas possession such as New Caledonia and French Polynesia and is pursuing ambitions to wield greater influence on the region, particularly through Southeast Asia.

Macron and Widodo spoke for half an hour and "decided to work on a true strategic partnership in the Indo-Pacific", said the France's Elysee palace.

It would notably "cover the question of the ecological transition, of support for employment and growth in Indonesia and the post-Covid revival", the French presidency added.

The talks came ahead of a Jakarta visit by French Foreign Minister Jean-Yves Le Drian with Indonesia due to take over the rotating G20 presidency after Italy.

Widodo and his French counterpart also reviewed coordination at ASEAN, Southeast Asia's regional bloc, where Indonesia, with a population of more than 270 million, plays a pivotal role.