The meetings make President Donald Trump look engaged and interested, countering critics who have questioned his mental acuity, but they have done little to advance policy. 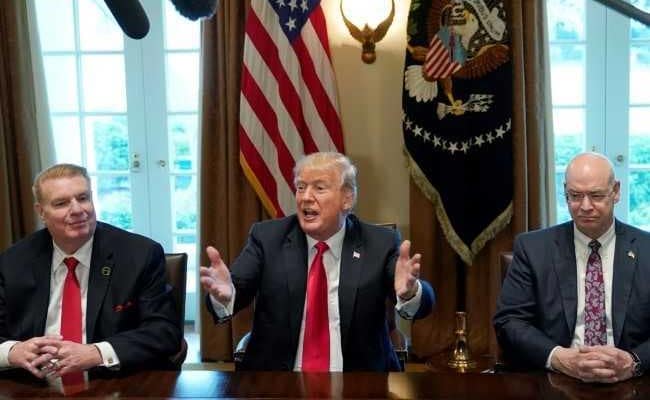 The meetings make Trump look engaged and interested, countering critics who have questioned his mental acuity, but they have done little to advance policy.

Democrats, who keep attending despite seeing few actual results, increasingly question whether these sessions are merely a repackaging of Trump's star turn on The Apprentice, a TV show he hosted for 14 seasons.

"It's always good to talk, but it strikes me as a presidential show more than anything," Senator Sherrod Brown, a Democrat who attended a trade meeting with Trump, told Reuters.

"The problem is the president agreed with everything everybody said when I was there. We were saying opposite things sometimes," Brown said.

At a meeting about gun laws on Wednesday, Trump presided over a free-wheeling discussion and endorsed stricter gun regulations than Republicans typically support.

So, will that lead to anything?

Senator Dick Durbin, the No. 2 Senate Democrat who was present for a similar meeting with Trump about immigration, advised caution. "My advice is hope for the best; don't be surprised if he changes his mind in 48 hours," Durbin told reporters on Wednesday.

People close to Trump said the idea of opening up such meetings lets him transmit his message directly to the public and contrast his style with that of Republicans and Democrats from Capitol Hill.

"He comes out of 15 years of a reality TV show, and part of the show is, you show every aspect of your business activities," said Chris Ruddy, a Trump friend. "It's great. He has U.S. senators as his cast."

Still, that cast is aware that the cameras are rolling, which can affect how they behave.

A White House official said the decision to open up the typically private meetings was "100 percent Trump." Trump was pleased when the press stayed for the meeting on immigration and decided, at least for some meetings, to continue the practice.

"He loved it, he thought it was fabulous. He said that worked out well, let's do more of that," the official said.

Since that gathering, Congress has failed to pass any immigration legislation, and Trump's own legislative proposal was trounced in the Senate.

Then there is the follow-through.

"The upside is it's fascinating television. It actually shows Trump in an authentic and real-life situation where he's trying to hash out policy," said Republican strategist Ryan Williams, a former spokesman for one-time presidential candidate and current Senate candidate from Utah Mitt Romney.

"The downside is they turn into events that are wildly off script from generally accepted Republican Party policy, and he rarely follows up on the items that are discussed in the meetings," Williams said.

Promoted
Listen to the latest songs, only on JioSaavn.com
Matt Dallek, an associate professor of political management at George Washington University, said the meetings were "fundamentally deceptive" because Trump frequently espouses views in front of the cameras that "he has not held previously and that he does not stick with."
© Thomson Reuters 2018

(This story has not been edited by NDTV staff and is auto-generated from a syndicated feed.)
Comments
Donald TrumpSherrod BrownDick Durbin