Tourists Left Lewd Messages On Beach. How Clean-UP Was Done

With 1.4 billion tourists traversing the world in the past year alone, many destinations have decided discouraging tourism is better for their economy that attempting to accommodate the droves. 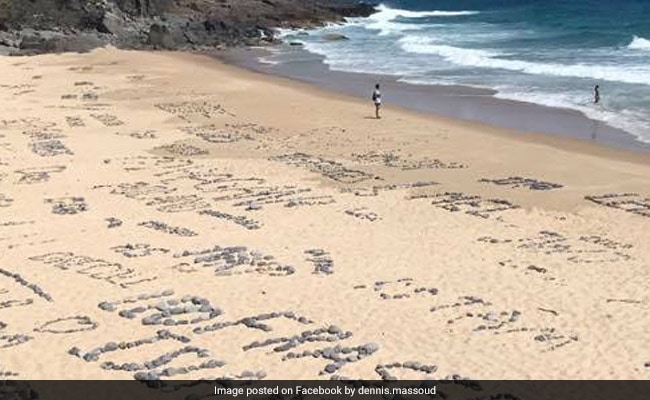 Dennis Massoud said he organized a group of 10 to help declutter the beach.

The last thing you'd expect to see on an idyllic beach on the coast of Queensland, Australia, is hundreds of gray stones on the sand spelling out people's names and phrases such as "send nudes," but that's exactly what locals had to clean up after tourists left their mark.

A Facebook user named Dennis Massoud documented the littering of Granite Bay in Noosa National Park in a set of photos that show the before-and-after of the shoreline. In the photos, Massoud shows the small cove strewn with rocks that were placed by tourists as mementos to their time there, except they were all left behind.

Massoud said he organized a group of 10 to help declutter the beach and return the stones to where they belonged. He also took photos of conservation signs around the park that emphasized Noosa's special values: "Make your visit low impact and leave no trace," reads one of the posted advisories.

"Disgusting," wrote one commenter, who also wanted backpackers to "leave our beaches and stop destroying them." Others called the rock formations ugly and an "eyesore." One called for punishment, and another placed the responsibility on tourists to clean up after themselves.

"What is wrong with these people!! They should be made to come back and do it," she said.

This isn't the first time tourists have been on their worst behavior in the presence of the local population at an international destination. So widespread is the problem that across the world, dozens of major tourist destinations have adopted pledge systems meant to keep tourists in line.

The themes of the pledges range based on location, but their basic premises aim for the same thing: Treat the destination respectfully, don't leave trash behind, stay on marked paths and sleep at official campsites. From Iceland to New Zealand, the pledges are designed to keep visitors safe, and also to protect regional ecosystems that can be disrupted by crowds of travelers.

It's a phenomenon so troubling it even has its own word - overtourism. With 1.4 billion tourists traversing the world in the past year alone, many destinations have decided discouraging tourism is better for their economy that attempting to accommodate the droves.

Cities like Rome and Venice have become overrun with historical destination-seekers, causing accidents and overcrowding. To get ahead of potential disruption, destinations like the Faroe Islands, in the North Atlantic, have chosen simply to shut down briefly for preservation reasons.

Smartphones, and particularly the desire to snap surroundings with Instagram-style allure, seem to be part of the trouble. Picture-taking in the Louvre has led to some calling for the removal of the Mona Lisa, and in the Czech Republic, a selfie ban was instituted after tourists in the "Church of Bones" physically moved bones to elevate the quality of their photos. Locals said it was desecration of a holy site.

Tourists at the Fairy Glen on the Isle of Skye, in Scotland, have engaged in a stone-stacking ritual, piling stones into towers not to be used as hikers' wayfinding cairns, but posed against a serene backdrop. Locals said that even though enthusiasts called the practice "meditative" and "artistic," it was actually causing coastal erosion to speed up in the Scottish Highlands.

In some places, bad tourism is a matter of etiquette, but in other places breaking the rules can actually mean breaking the law. In Sardinia, Italy, two French tourists were charged with sand theft for stealing nearly 90 pounds of sand from Chia beach. The pair face a sentence of one to six years in prison for the offense.

In Rome, new laws were implemented to curb disruptive conduct and harmful behaviors after tourists had been found bathing in fountains and historical monuments. At solemn historical sites, such as the Holocaust memorial in Berlin and the Auschwitz-Birkenau Memorial in Poland, backlash and public shaming on social media have risen alongside the selfie-takers, who some historians say are not showing proper respect.

While many destinations welcome - even thrive from - tourism, there are still boundaries that locals expect when it comes to the integrity of their home - and their value to future generations.

Massoud's words sum up the frustration over careless visitors: "They don't know the meaning of the words National Park," he commented.

(Except for the headline, this story has not been edited by NDTV staff and is published from a syndicated feed.)
Comments
AustraliaAustralia beachTourism In Australia