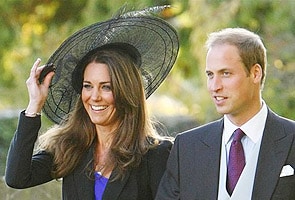 London: Not invited to Kate and William's wedding? Fear not. For a price, royalist romantics can follow in the happy couple's footsteps on a London walking tour.

Among the hundreds of British firms hoping for a boost in business because of April's royal wedding is Celebrity Planet, a London-based travel company offering a tour of sites with links to Prince William and his fiancée, Kate Middleton.

The two-hour amble through a wealthy swath of London charts the highs and lows of the royal romance as breathlessly reported in the U.K.'s tireless tabloid media. One of the first stops is a branch of Jigsaw, the clothing chain where Middleton was working as a part-time accessories buyer in 2007 when William got cold feet and broke off their relationship.

"It was while she was working here that she got the dreaded call from Prince William saying he just wasn't that interested," said tour guide Hana Umezawa, 25. "She burst into tears in front of all her colleagues."

More insights are on hand down the road outside Mahiki, a nightclub favoured by the young and wealthy, and by paparazzi hoping to see them behaving badly -- and where tabloids reported Prince William racked up a bar bill of 11,000 pounds in a week after the break-up.

Fortunately for the British economy, by the end of 2007 the on-off romance that began when the couple were students at St. Andrew's University was on again.

The announcement of their engagement in November unleashed a flood of business opportunities. Mills and potteries from China to Stoke-on-Trent have produced vast volumes of plates, tea towels and other commemorative trinkets.

Tourist authority Visit Britain expects a surge in visitors this year because of the wedding, and airlines have already reported a boost in bookings out of the country for what will be a long weekend for most Britons. The government has made the day of the wedding -- Friday, April 29 -- a public holiday.

The royal tour is a new offering for Celebrity Planet, which runs "celebrity and pop-culture tours" in London, New York and several European cities. Its most popular London offerings include a Beatles walk and tours devoted to Harry Potter and Jack the Ripper.

The Kate and William walk stops at London landmarks like St. James's Palace -- the residence of Princess William and Harry -- and Westminster Abbey, where the prince and Middleton will be married by the Archbishop of Canterbury in front of more than 2,000 guests.

There are also lesser-known spots like jeweler Garrard, where William's father, Prince Charles, bought a diamond and sapphire engagement ring for his intended, Lady Diana Spencer. The ring passed to Diana's children after her death in a car accident in 1997, and William gave it to Kate when they became engaged.

There's also the building that housed the office of Kate's great great-grandfather, Richard Noel Middleton, a wealthy industrialist with the foresight to set up a trust fund for his descendants' education. That allowed Kate to go to 30,000-pound-a-year ($47,000-a-year) Marlborough College, one of Britain's most elite schools.

Celebrity Planet chief James Bonney says he has had lots of inquiries -- especially from Americans -- since launching the tours earlier this month, although so far only a handful of people have actually paid the 15 pounds ($24) ticket price. Those averse to walking can pay 75 pounds ($120) for a chauffeur-driven version of the tour.

"It's picking up gradually. It will get much busier in the next month," Bonney said. "We are expecting to do pretty brisk business when the weather turns."

Last week, the dozen or so participants on the Friday tour were all journalists, who quizzed Umezawa about some of the lesser-known stops on the itinerary, like White's, the 300-year-old gentlemen's club where Prince Charles held his bachelor party in 1981.

"I'm guessing that in England a 'gentlemen's club' is not a strip club?" asked an American reporter -- and was assured that in Britain it is a much more sedate sort of place.

In England, gentlemen's clubs are often exclusive members-only institutions where women were traditionally barred from membership -- and sometimes still are.

"But they can't go too crazy," she said. "No one wants a press photo of Prince Harry and a lap dancer."
Comments
William-Kate weddingroyal romanceLondon tour operatorsLondon walking tour