A video has surfaced on Twitter of President of France Emmanuel Macrons on a phone call with Ukrainian President Volodymyr Zelenskyy. 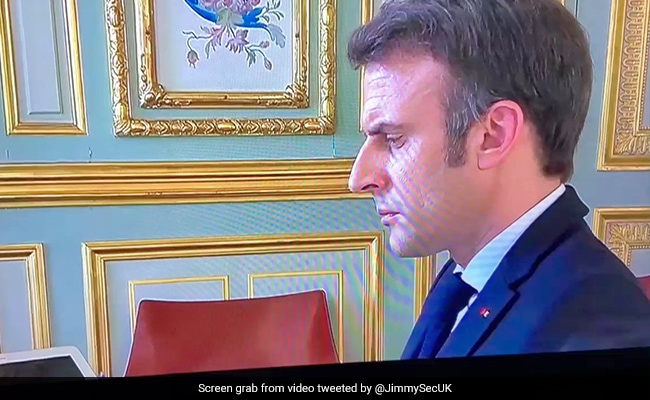 Russia's full-scale invasion of Ukraine was a shock to most people in the world, and it seems French President Emmanuel Macron was one of them. In a never seen before footage of a private phone call between Macron and his Ukranian counterpart Volodymyr Zelenskyy on the day Kremlin forces launched an invasion, the French President can be seen in dismay after realising its extent.

The 42-second video shows the two leaders discussing the movement of Russian military in Ukraine after Vladimir Putin ordered tens of thousands of his troops into Ukraine on a "special military operation" - a mass invasion on a scale unseen in Europe since World War Two.

The video was posted by a Twitter user Jimmy. He said in the post, “Some pretty incredible footage of Macron talking to Zelensky on the morning of the invasion, when the scale of the full-scale Russian assault on Ukraine was becoming clear.”

In the comments, Jimmy wrote, "And note that Zelensky's first instinct was to ask Macron and others to speak to Putin in order to try and end the war via diplomatic means. "Warmongering" he certainly wasn't - he just wanted to stop the killing.” The video has amassed 1.5 million views and 15,900 likes.

Some pretty incredible footage of Macron talking to Zelensky on the morning of the invasion, when the scale of the full-scale Russian assault on Ukraine was becoming clear.pic.twitter.com/9ETzGScTmp

In the video, the Ukrainian President can then be heard urging Mr Macron to speak to Russian President Vladimir Putin to resolve the issue through diplomatic channels and evade war.

President Zelensky added, "We couldn't imagine it - that's not been seen like it was in 2014.”

President Zelensky said this as Russian troops moved beyond the eastern Donbas region. He emphasised, “So, it's much, much more.”

A concerned President Macron said, "It's clear. It's total war."

Mr Zelensky answered with a "Yes."

We are sure that European leaders and Biden can connect and they call him [Putin] and say, 'Stop'.”

Mr Zelensky said, "He will stop. He will listen to you."

It has been over six months of the Russia-Ukraine war. Since then, tens of thousands of people have been killed, millions have fled and cities have been reduced to rubble by Russia's relentless bombardment.