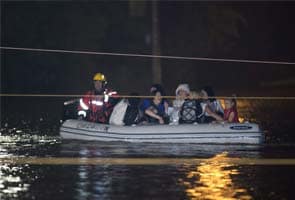 Toronto: A severe thunderstorm caused flash flooding in Toronto, cutting power to at least 300,000 in Canada's largest city, shutting down subways, and leaving about 1,400 passengers stranded for hours on a commuter train filled with gushing water.

Environment Canada said some parts of the city had been drenched with more than 3.9 inches (10 centimetres) of rain in the Monday evening storm, easily beating the previous one-day rainfall record of 1.4 inches (3.6 centimetres) in 2008.

Toronto police and firefighters used small inflatable boats to rescue commuters from a 10-car, double-decker train that stalled in floodwaters that reached up to the lower windows. Murky brown water spilled through the bottom floor of the carriages, sending passengers fleeing to the upper decks. (See pics)

A Metrolinx spokeswoman said power was shut off and the windows were cranked opened to provide ventilation. The train was carrying about 1,400 passengers during the Monday evening rush hour.

"There's a full-on river on either side of us... We. Are. Stuck. Hard," passenger Jonah Cait wrote on Twitter.

Another passenger told the TV news network CP24 that she could see people clinging to trees after abandoning their cars on a flooded highway alongside the tracks.

Police and firefighters used the inflatable boats to ferry all 1,400 passengers a short distance to higher ground. It took until about 12:30 a.m. to complete the rescue operation, about seven hours after it began. Passengers were transported to a nearby subway station to resume their trip home.

Emergency officials said five or six people were treated at the scene for minor injuries, but no one required hospitalization.

All of Toronto's subway service was temporarily halted due to power and signal issues. Some stations were also flooded. Partial service later resumed but large parts of the system were still shut down. It was unclear if the subway system would be in full operation by Tuesday morning.

The storm left the downtown core dotted with abandoned vehicles, some sitting in water up to their windows. One woman, in a T-shirt and shorts, dove head-first through the window of her marooned car before wading away in the thigh-deep currents.

Porter Airlines cancelled all flights out of the downtown airport due to power outages in the terminal Monday evening. It was not clear how many flights were affected.

As many as 300,000 Toronto Hydro customers lost power. Toronto Hydro said about 200,000 customers were still without electricity as of 1 a.m. Tuesday, primarily in the west and northwest parts of the city. The utility could not say when it expected full power to be restored.

Promoted
Listen to the latest songs, only on JioSaavn.com
Toronto's flash flooding comes two weeks after extensive flooding in Calgary turned parts of the western Canadian city into a lake and forced up to 100,000 Albertans from their homes. Three bodies were recovered during the floods.