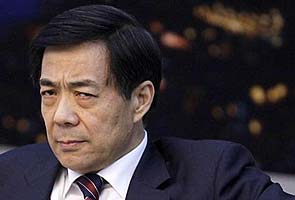 Beijing: China's Communist Party suspended former high-flying politician Bo Xilai from its top ranks and named his wife, Gu Kailai, a suspect in the murder of a British businessman, in revelations on Tuesday likely to shake leadership succession plans.

The decision to banish Bo from the Central Committee and its Politburo effectively ends the career of China's brashest and most controversial politician, who was widely seen as pressing for a top post in China's next leadership, to be settled later this year.

The official Xinhua news agency confirmed a Reuters report several hours earlier that Bo had been suspended from his party posts, and separately reported that his wife is suspected in the murder of Briton Neil Heywood.

"Comrade Bo Xilai is suspected of being involved in serious disciplinary violations," said the news agency said, citing a decision by the central party leadership to suspend Bo from its top ranks.

"Police set up a team to reinvestigate the case of the British national Neil Heywood who was found dead in Chongqing," Xinhua said, referring to the sprawling south-western municipality where Bo was party chief until he was dismissed in March as a scandal surrounding him unfolded.

"According to the reinvestigation results, the existing evidence indicates Heywood died of homicide, of which Gu Kailai and Zhang Xiaojun, an assistant in Bo's household, are highly suspected," said the news agency, citing a dispute over unspecified "economic interests" between Gu and Heywood.

The announcements are the latest turn in the growing scandal over Bo and his family that erupted after his vice mayor, Wang Lijun, fled into a U.S. consulate for 24 hours in February, alleging that Gu was involved in Heywood's death.

"This is so dramatic, so extraordinary," said Li Zhuang, a Beijing lawyer who was once jailed in Chongqing for challenging Bo's campaign against organised crime.

"If, and I stress if, there are real proven links to Heywood's death, then we can imagine that Gu and Bo Xilai will find out that, as Chinese television has said about this, nobody is above the law."

Any criminal investigation of Bo would usually only begin after the party's disciplinary agency investigated him and decided whether to turn his case over to police and prosecutors, said Li.

"This means that Bo's political career is effectively over," Chen Ziming, an independent political scholar in Beijing, said before the announcement, citing rumours of Bo's suspension.

The decision does not mean Bo has been expelled from the Communist Party.

Unlike past removals of defiant leaders over corruption charges, Bo's downfall has been tinged by ideological tension and sparked open opposition from leftist sympathisers who have insisted he is the victim of a plot.

Residents of Bo's former power base, Chongqing, were shocked on hearing the news, said Zhang Mingyu, a businessman in the city who has accused Bo of using his crackdown on organised crime to stifle critics and legitimate business.

"In Chongqing, everybody is up and discussing this and waiting for more news," Zhang told Reuters. "The ordinary residents are staggered. Many didn't think the rumours could be true. They want to know what the hell has been going on."

China's censors worked hard to stifle chatter about the scandal, blocking sensitive words on microblogging sites, including "Chongqing". But many users skirted the restrictions and discussed Bo's fate with a mixture of innuendo and word play.

"What on earth were you evil-doers left over from the Cultural Revolution thinking!" wrote Weibo user Ling Tiaojue.

Bo promoted a Mao Zedong-inspired "red" culture in Chongqing and a harsh crackdown on organised crime, prompting fears among some people of a return to methods seen during the chaotic Cultural Revolution in the 1960s.

Wang's flight to the U.S. consulate and his allegations prompted the British government to urge an investigation into the death in November of the Briton, Heywood, who Wang said was close to Bo's family and had a dispute with Bo's wife, Gu.

British Foreign Secretary William Hague said he welcomed China's announcements of an investigation into the death of Heywood.

Bo, 62, and his wife, formerly a powerful lawyer, have disappeared from public view since his removal as chief of Chongqing, and they have not responded publicly to the reports. Nor has Wang, who is under investigation.

Handsome and smartly dressed in a party of bland conformists, Bo arrived in Chongqing in 2007 and promoted it as a bold egalitarian alternative model of growth for China.

He vowed to narrow the gap between rich and poor, kindling hopes among supporters that he could nudge the country in a similar populist direction if he entered the central leadership.

Promoted
Listen to the latest songs, only on JioSaavn.com
At a news conference days before his dismissal as Chongqing chief, Bo scorned as nonsense unspecified accusations of misdeeds by his wife and said some people were pouring "filth on my family".