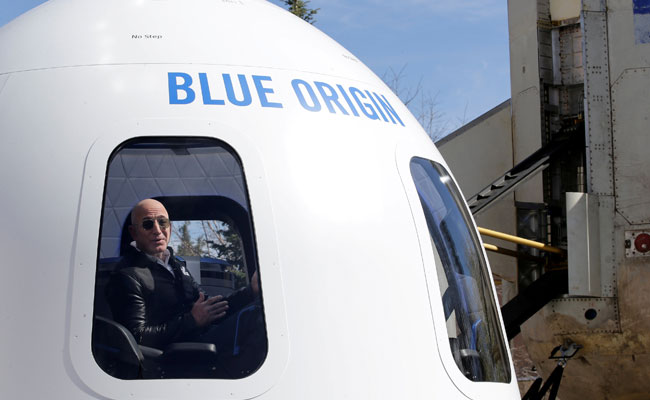 Potential customers and the aerospace industry have been eager to learn the cost of a ticket on Blue Origin's New Shepard space vehicle, to find out if it is affordable and whether the company can generate enough demand to make a profit on space tourism.

Executives at the company, started by Amazon.com Inc <AMZN.O> founder Bezos in 2000, told a business conference last month they planned test flights with passengers on the New Shepard soon, and to start selling tickets next year.

The company, based about 20 miles (32 km) south of Seattle, has made public the general design of the vehicle - comprising a launch rocket and detachable passenger capsule - but has been tight-lipped on production status and ticket prices.

Blue Origin representatives did not respond to requests for comment on its programs and pricing strategy. Bezos said in May ticket prices had not yet been decided.

One Blue Origin employee with first-hand knowledge of the pricing plan said the company will start selling tickets in the range of about $200,000 to $300,000. A second employee said tickets would cost a minimum of $200,000. They both spoke on condition of anonymity as the pricing strategy is confidential.

The New Shepard is designed to autonomously fly six passengers more than 62 miles (100 km) above Earth into suborbital space, high enough to experience a few minutes of weightlessness and see the curvature of the planet before the pressurized capsule returns to earth under parachutes.

The capsule features six observation windows Blue Origin says are nearly three times as tall as those on a Boeing Co <BA.N> 747 jetliner.

Blue Origin has completed eight test flights of the vertical take-off and landing New Shepard from its launch pad in Texas, but none with passengers aboard. Two flights have included a test dummy the company calls "Mannequin Skywalker."

The company will do the first test in space of its capsule escape system, which propels the crew to safety should the booster explode, "within weeks," one of the employees said.

SMALL STEP FOR A MAN

Blue Origin, whose Latin motto means "step by step, ferociously," is working towards making civilian space flight an important niche in the global space economy, alongside satellite services and government exploration projects, already worth over $300 billion a year.

Bezos, the world's richest person with a fortune of about $112 billion, has competition from fellow billionaires Richard Branson and Elon Musk, Tesla Inc's <TSLA.O> chief executive.

Branson's Virgin Galactic says it has sold about 650 tickets aboard its own planned space voyages, but has not set out a date for flights to start. The company is charging $250,000 per ticket, in line with Blue Origin's proposed pricing.

SpaceX, founded by Musk in 2002, says its ultimate goal is to enable people to live on other planets.

All three are looking to slash the cost of spaceflight by developing reusable spacecraft, meaning prices for passengers and payloads should drop as launch frequency increases.

While Blue Origin has not disclosed its per-flight operating costs, Teal Group aerospace analyst Marco Caceres estimated each flight could cost the firm about $10 million. With six passengers per trip, that would mean losing millions of dollars per launch, at least initially.

Three sources said Blue's first passengers are likely to include its own employees, though the company has not selected them yet.

(Except for the headline, this story has not been edited by NDTV staff and is published from a syndicated feed.)
Comments
Jeff BezosSpace Travel